[HanCinema's Film Review] "You are my Sunshine" + DVD Giveaway 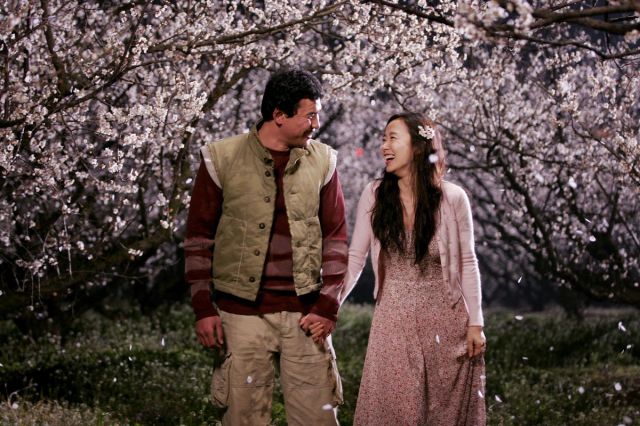 The time is the early nineties in rural South Korea. Eun-ha (played by Jeon Do-yeon) is satisfied with just working as a pseudo prostitute for the foreseeable future. Seok-joong (played by Hwang Jung-min) is satisfied just hanging out with his prize cow, but his mother (played by Na Moon-hee) pushes him to get married so he can talk to actual human girls for a change. Yet rather than accept marriage for the sake of marriage, Seok-joong is determined to push for love- and Eun-ha is his object of affection.

While Eun-ha is mildly bemused by Seok-joong's attitude, she's surprisingly skeptical in the face of his advances. Superficially this is because Seok-joong is a bit of an oaf who wears his heart on his sleeve. But the real issue is Eun-ha. Eun-ha is good at selling herself in sex mainly because she doesn't really believe in love. Just fun. Seok-joong simply takes her initially pleasant attitude too much at face value.

It's tempting to call the central relationship of "You are my Sunshine" creepy. Eun-ha is practically the first woman has ever seriously tried to talk to, so isn't he just imprinting a tad too strong? Perhaps, but that's rather missing the point. Imprinting is an appealing romantic device because it's completely unconditional. Seok-joong loves Eun-ha like he loves his cow. If that sounds degrading, let's consider this. If a cow is deserving of genuine affection, how can a human with more concrete complicated feelings be worth less than that?

That's what makes the central romance of "You are my Sunshine" so touching. Eun-ha is an independent woman used to doing things her own way in part because life was so disastrous back before started working for herself. Yet take a look at Eun-ha once the plot moves to separate her from Seok-joong. Sure, she'll put up the bare minimum of human decency. But where's the soul? Where's the life? Where is the woman that Seok-joong loves so dearly? Where is his sunshine?

The literal Korean title actually reads as destiny rather than sunshine, although it's all to the same point. "You are my Sunshine" is about how happiness is finding someone who can understand and appreciate the best parts of you. It's all too easy to find someone who can only see you through a distorted lens. Even if Seok-joong's mom loves him, she doesn't accept his obvious flaws, given the whole arranged marriage pressure. What's more, she can't see that Eun-ha offers Seok-joong a sincerity he's never seen anywhere else, reflected from the sincerity he first offered to her.

I'm dancing around a lot of the plot because I feel in the case of a film like this, it's better to be surprised. Does it really matter why Eun-ha and Seok-joong separate, when the best scene by far is their powerful reunion, where they have to reconcile the vestiges of memory with the person sitting in front of them? Labels don't matter in the face of that. Through laughter or tears, that's the portrait of love "You are my Sunshine" presents all too well.

"You are my Sunshine" is directed by Park Jin-pyo and features Jeon Do-yeon, Hwang Jung-min and Na Moon-hee.

You Are My Sunshine DVD

"[HanCinema's Film Review] "You are my Sunshine" + DVD Giveaway"
by HanCinema is licensed under a Creative Commons Attribution-Share Alike 3.0 Unported License.