[HanCinema's Film Review] "You Are My Vampire" 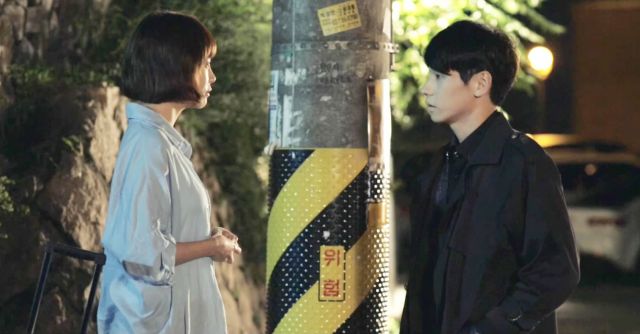 There are only two possible outcomes to "You Are My Vampire". Either Nam-geol (played by Park Jeong-sik) really is a vampire, or Gyoo-jeong (played by Choi Yoon-young) has an overactive imagination. Well, I suppose it's possible for both of these to be true. It's strange, though, that as convinced as Gyoo-jeong is that her new neighbor is a vampire, events in the local neighborhood manage to shock her to such an extreme degree.

"You Are My Vampire" is extremely quirky with these revelations, but the movie doesn't roll around in its eccentricity, braying proudly about the weirdness of its heroine and how of course Gyoo-jeong would be a writer considering all the wacky interesting adventures she has. Rather, the movie takes the point of view that life is very strange. So why shouldn't vampires be real?

Even though all of these background details seem important, Goo-yeong never really bothers investigating them in depth, instead focusing on the mystery of whether or not Nam-geol is a vampire. Mind, all of these end up affecting her directly in much stranger and more interesting ways than Goo-yeong's rather mundane goal. Aside from the whole vampire thing, she's also trying to get her parents to reconcile for reasons that only become clear right at the end.

Life, as usual, has other plans. The people in Goo-yeong's life come up with their own solutions to their own problems, which sometimes involve her, but for the most part they don't. So it's really no wonder she finds herself drawn to Nam-geol, even though his true identity of being a vampire or not has almost no relevance to anything. And even if it were relevant, why would Goo-yeong want to date a vampire? He'll just try to eat her.

Yeah, there's lots of weirdness going on in this movie that's difficult to digest. Everything is just strange enough that it defies any kind of political statement or metaphorical message or general reflection of life or any of those other neat little categories which help us relate to film. "You Are My Vampire" is just weird. But it's not a bad weird. I found myself smiling through most of the proceedings, smiling and squinting, just thinking to myself, what in the world is going on here...it's that kind of movie.

Now, sometimes the film drags a little with the odd slice of life and it's difficult to pay attention or pinpoint any kind of clue to solving to the mystery. That's what life is, though. Resolutions are sudden, and then everybody's just left wondering what to do next. Which makes it all the more appropriate when we reach the ending. With the mystery solved, Gyoo-jeong decides that maybe her story isn't a vampiric romantic comedy after all- and maybe that was the point for us, too.

"You Are My Vampire" is directed by Lee Won-hoi and features Choi Yoon-young and Park Jeong-sik.

"[HanCinema's Film Review] "You Are My Vampire""
by HanCinema is licensed under a Creative Commons Attribution-Share Alike 3.0 Unported License.