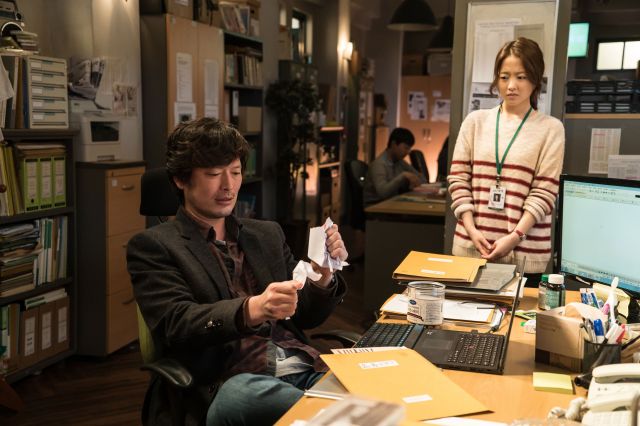 Ra-hee (played by Park Bo-young) is a rookie reporter in the entertainment press. Jae-gwan (played by Jung Jae-young) is her exceptionally tough editor, constantly barking orders at Ra-hee to make sure she gets the job done right. Together, they do important investigative journalism...about celebrities. Yes, the stakes in "You Call It Passion" are relatively low, and the eventual movement of the plot toward an exposé about a false accusation doesn't really do much to up the ante.

But let's start with the good. Generic though "You Call It Passion" may be in its description of starting out in the journalism industry, Ra-hee is a fairly upbeat lead character who is only somewhat put down by Jae-gwan's constant verbal abuse. Jae-gwan practices tough love- specifically, he loves his employees, and he loves his newspaper, but certain market realities force them all to make unfortunate ethical sacrificies in the name of keeping their jobs.

"Wait", you may be wondering, "isn't entertainment news just shallow public interest stuff in the first place? How do you make a dumbed down version of that?" This is...a very good question actually. While I generally enjoyed "You Call It Passion" while I was watching it, looking back, very little of the story makes much sense except in the most archetypal terms. We want the reporters to succeed in the end, not because we particularly like them, but because they're fighting for truth and justice.

While this all makes for a cute and simple morality tale, I'm at a bit of a loss as to how this is supposed to relate to, well, anything in the real world at all these days. You might have noticed that there have been a fair amount of scandals lately about alleged sexual assaults in the Korean entertainment industry. Yet rather than go after the cultural climate, the entitled actors who commit these crimes, or the press corps that blow some of these cases out of proportion and ruin lives..."You Call It Passion" has as its villain a complicated corporate conspiracy whose exact motives I was ultimately unable to parse.

In the end we don't even know that much about Ra-hee's workplace or her co-workers. They're just a long line of people who Jae-gwan singles out for assignments, until they begrudgingly decline owing to other commitments, and at long last Ra-hee is the only one left. The dynamic between Jung Jae-young and Park Bo-young is pretty good, as mentor and mentee who openly despise each other yet ultimately appreciate the attention. Ra-hee wants to be better, and Jae-gwan wants to feel like he's being a good influence.

All of this just leads us to the same place, though- so what? I couldn't even parse where Ra-hee's love life was at the end of "You Call It Passion", because we get an airport scene and a hospital scene whose implications are somewhat at odds with each other. Of course, it's very easy to get confused about this kind of stuff, when character development is so minimal and doesn't progress concurrently with the plot. While funny in parts, ultimately, "You Call It Passion" lacks staying power.

"[HanCinema's Film Review] "You Call It Passion""
by HanCinema is licensed under a Creative Commons Attribution-Share Alike 3.0 Unported License.