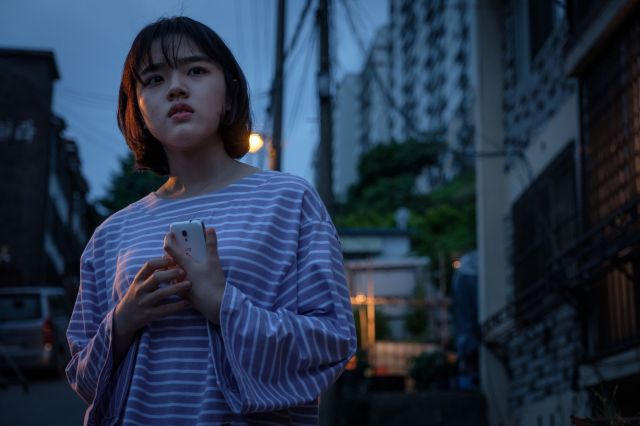 Take the woman who abruptly invites random suspicious looking men wearing suits to look over Young-joo and Young-in's apartment. At first glance she may seem a put-upon landlord, but it turns out this woman is actually their aunt, and has been critical of the siblings for failing to think about their future realistically. It's not clear how leaving their childhood home is any more realistic than just staying there. All the same, it's the adult, financially secure thing to do.

This conflict, the practical versus the spiritual, is what "Young-ju" is all about. First Young-in and eventually Young-joo are driven to act destructively in the name of maintaining their current lifestyle. These actions, in addition to predictably ending in failure, are also poetically damaging to the once strong relationship between the siblings. Young-joo and Young-jin do not talk to each other that much over the course of the film- this is how they become alienated.

Consequently Young-joo ends up looking for succor from a far more unexpected source. This is where "Young-ju" launches into its main critical irony. The people Young-joo runs into who make her life more difficult are not particularly vile ones. Sure, they're unemotional and uncaring, but they're also always rationalizing that such-and-such situation is not their fault. While it's not Young-joo's either, that's her problem, not theirs. Even a sequence involving an obvious voice-phishing scam just makes Young-joo feel like a failure, because that's what keeps happening. The blame is passively put on Young-joo.

Then Young-joo meets Sang-mun (played by Yoo Jae-myung) who committed a monstrous act and his wife Hyang-sook (played by Kim Ho-jung) who tries to keep him from going suicidal. Amusingly enough they operate a tofu shop. Tofu, you may or may not know, is often traditionally eaten by Korean people who leave prison in order to symbolize purification. Their physical actions mirror this, as the two show near infinite patience not just to Young-joo but also to their own discouraging lot in life.

That's what the moral message is here- that it's important to try to be a good person, and not just avoid being a bad person. It is through this ethos Sang-mun and Hyang-sook alone provide critical emotional support to Young-joo. The reality of the weirdness of the situation does not come into play. Indeed, the final melancholic shots linger on the aftermath of Young-joo choosing not to send a text message. All throughout the film, Young-joo has ran into people who boast of how correct they are or were. But caring about being right, as it turns out, is no guarantee of moral scruples.