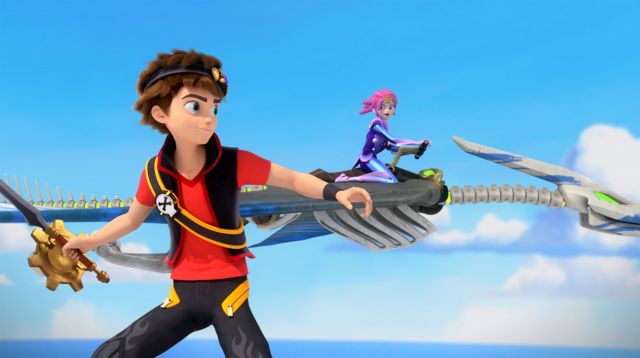 With minimum prompting Zak (voiced by Um Sang-hyun) grabs a necklace to use as an accessory for his surf stream video only to discover that it has the power to activate a portal to another dimension. Note that Zak found the necklace in question being used as a wall ornament. Now that's some questionable judgment when it comes to interior decorating. Most people who hang up guns on their walls at least have the sense not to have them loaded.

But hey, maybe I'm asking for too much internal logic when it comes to a children's cartoon. Then again, "Zak Storm" is from the same studio that made "Miraculous" so high expectations seem warranted. While "Miraculous" too was clumsily repackaged from multiple episodes of the same-named TV show, the cast was well-drawn enough and the genre limited enough that even in the theatrical format the strengths of the series were well-illuminated.

"Zak Storm" feels, by contrast, way too rushed. Of the seven main characters only half of them have much in the way of clearly defined goals and characterization. Unfortunately Clovis (voiced by Jeong Seon-hye) gets most of the dialog and he is by far the most annoying of the bunch, as is to be expected from a child poltergeist. Even Zak demonstrates visible impatience at irritation at Clovis and his constant stream of exposition, which is not a good sign.

Clovis is fine in the larger group dynamic- it's just we don't get comparable exposition for anyone else. Atlantean Princess Cece (voiced by Lee Ji-hyun-VII) and Teenage Viking Crogar (voiced by Choi Nak-yoon) start out as Zak's enemies only to very arbitrarily and rapidly agree to join his crew. Caramba (voiced by Kim Young-sun-I) is an alien robotics scientist studying the interaction of science and magic. Calabrass (voiced by Lee Joo-chang) is a sentient weapon who, ironically enough, seems morally averse to physical confrontation, going by his role in the giant lightning squid episode.

A common theme you might have noticed with these dramatis personae is that they all have genuinely interesting character designs. This is what makes it so frustrating that "Zak Storm" gives almost none of them any driving motivation. Even worse, Calabrass explicitly spells out to Zak what he has to do in order to go back home, but once the full crew is rounded up they just investigate random stuff for no reason.

I understand that children's cartoons are typically produced with a lot of filler. Here's the thing though. A theatrical repackaging of a childrens' cartoon should be demphasizing that to instead give a strong hook for watching the real show on television. "Zak Storm" gives me no reason to think that the television version is actually going to do anything with the main interesting aspects of the premise, instead just going over heavily worn clichés on the power of friendship. I mean geez, just look at Zak himself. His only apparent unique skills in this parallel dimension are surfing and making videos- neither of which he uses.