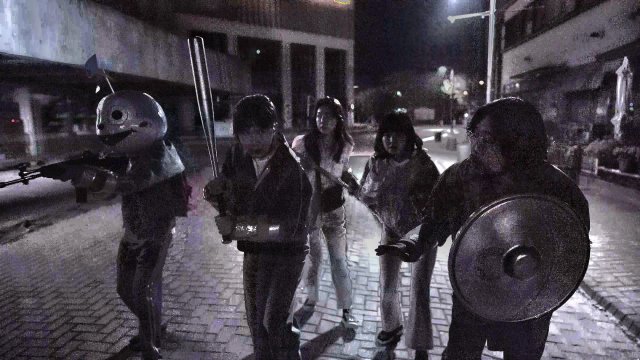 The Korean Weird Wave that took the Korean Fantastic section of this year's BIFAN by storm continues here, surprisingly so, in a zombie film, which shares very few similarities with the vast plethora of entries in the category, particularly regarding the protagonists but also the overall approach.

The story revolves around three friends living in the small and peaceful Heyri Art Village in Paju. Jin-seon is clumsy but takes care of people around her, Ga-yeon is a self-proclaimed witch, who sells a blue potion that supposedly can cure hangover, among other things. Hyeon-ah seems completely unremarkable but soon exhibits her prowess in self-defense techniques. During a town meeting, she is acquainted with Min-goo, a rather weird Youtuber who attends an action school and records himself on action wearing a huge cartoon head. Soon-gi is a coffee factory CEO who also runs a local art cafe. When a zombie infestation takes place in the town, the five of them come together to defend themselves and the people around them, while the blue potion plays a significant factor in their defense. Eventually, the army arrives but the group still find themselves in a position where they have to rely on their own powers.

The first unusual thing one will notice in Jang Hyeon-sang and Kim Joon-sik's direction, is that they take their time until they let the zombies appear, something that happens after 35 minutes or so. In this time, their effort focuses on introducing their characters, and particularly their distinct quirkiness, which seems to be the main trait of every one here. This presentation is actually hilarious, starting with Min-goo's overall behaviour towards other people (the scene with the courier is a great sample) and continuing with the three ladies, each of whom seems to be as weird as they come, but still rather likeable. At the same time, the comments about the cosmetics industry are rather pointy, despite the overall fable approach, and seem to extend to the way people can convince themselves and subsequently, those around them, for things that are utterly illogical, something the industry seems to base its whole marketing upon. 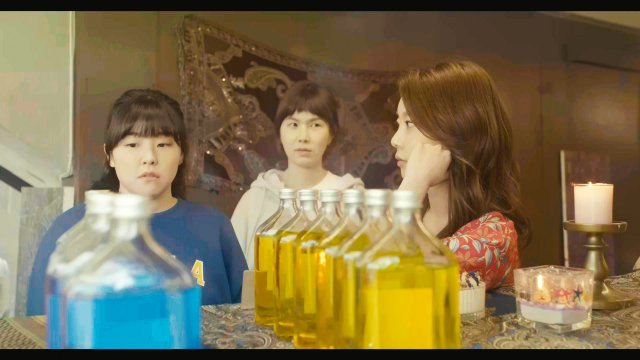 At the same time, though, Jang and Kim even turn those comments upside down after the zombie epidemic, again in hilarious fashion. This sense of hilarity actually continues during the zombie attacks, where a sense of danger and angst does exist, but humor is the element that eventually takes over. From the weapons the protagonists use, their interactions among them and with the army, to the implementation of coffee and the ridiculous recipe for the blue liquid all seem to point towards the same, quite entertaining direction. The romance that also blooms at some point is the cherry on top of the whole narrative.

This approach benefits the most by the acting, with the protagonists having grasped the weirdness their role demanded to the highest degree. Furthermore, the chemistry Gong Min-jung as Jin-seon, Park Sojin as Ga-yeon, and Lee Min-ji as Hyeon-ah exhibit is one of the film's biggest traits, particularly regarding the illogically calm way all of them react to the uncanny things that happen around them. Jo Seung-gu as Min-goo is even funnier, with his character functioning as the catalyst on a number of occasions, but in the most ridiculous way possible.

The same aesthetics apply to the action aspect, where the directorial approach retains the sense of hilarity even at moments that border on the grotesque, with the fact that Hyeon-ah can only deal with zombies that attack her first moving in that specific direction. 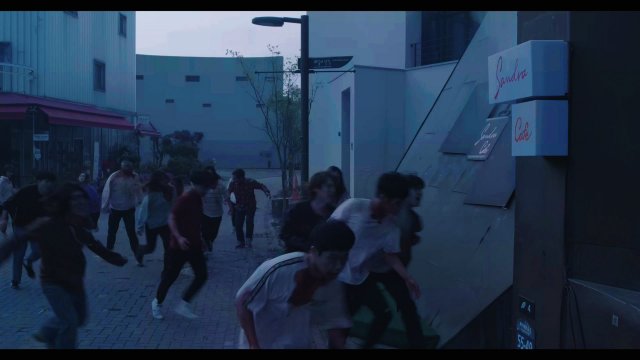 Kim Gu-young's cinematography captures the whole setting with realism, without any particular exaltation, while Jo Ah-young's editing implements a relatively fast pace through frequents cuts, that suits the overall aesthetics. At the same time though, at 120 minutes, the movie somewhat overextends its welcome, since a number of scenes seem unnecessary or lagging for no reason.

"Zombie Crush in Heyri" has some faults, but its weirdness and hilarity seem to put a rather entertaining cover to all of them, resulting in a film that is unique as it is fun.