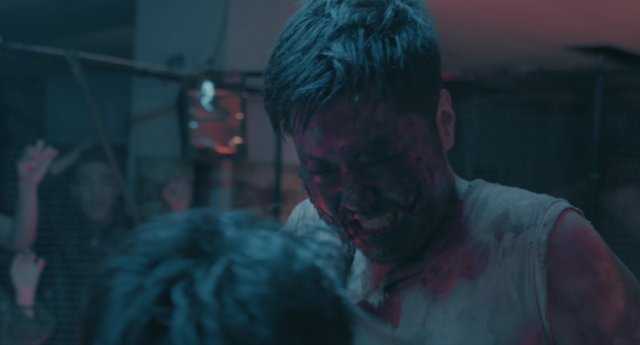 The opening computer graphics for "Zombie Fighter" depict some pretty bog standard world-building, explaining how the zombie virus came to take over the world. Where the backstory gets interesting is that, while scientists have not been able to find a cure for the zombie virus, they have developed a serum that, when injected into zombies, makes them attack each other. This is naturally not terribly useful. Unless you want to rebuild the economy around on zombie cage matches. Then it's very useful.

"Zombie Fighter" is not without precedent in its usage of zombies as a metaphor for capitalism. But I was genuinely impressed at the movie's fresh critique in a genre that at this point seems just about done to death. One critical irony at play is the fact that zombies aren't actually very good fighters. They're just wild animals. Which is why our lead character, Bane (played by Ha Joon-ho) is an ex-prizefighter wearing zombie makeup and using his best zombie snarls to keep people from noticing that his fighting technique is more complex than just random thrashing and biting.

Now, strictly speaking the actual lead character is probably Ye-ji (played by Kim Dan-mi), who is Bane's manager. Much as Bane has to dress up for fights, so too does Ye-ji dress up in fairly elaborate makeup to make an impression on fight organizers. There's a great deal of inherent amusing irony in how, with the world around them completely collapsed, the biggest threat Bane and Ye-ji face on a daily basis isn't zombies. It's being unemployed.

You'd think there'd be a lot of work to be done in terms of oh, I don't know, killing all the zombies and rebuilding society. But no, from what we can see everything about the nightmarish near future economy in "Zombie Fighter" revolves around zombie cage matches which are predictably operated by thuggish gangsters. At one point they even intentionally zombify a character with an outrageously helpful and difficult to reproduce skill set just so they can use theat person's fate as shock value in an upcoming business negotiation.

"Zombie Fighter" feels like a surprisingly plausible outcome of a theoretical zombie apocalypse mainly because the parallels with our own world are so obvious. Note the scenes with Bane hanging out at home with his daughter Sara (played by Jeon Hyun-kyung) as he starts the long painful healing process between fights. Their lives suck, and even hefty cage match purses aren't enough to really solve their problems. Still, it's all they have.