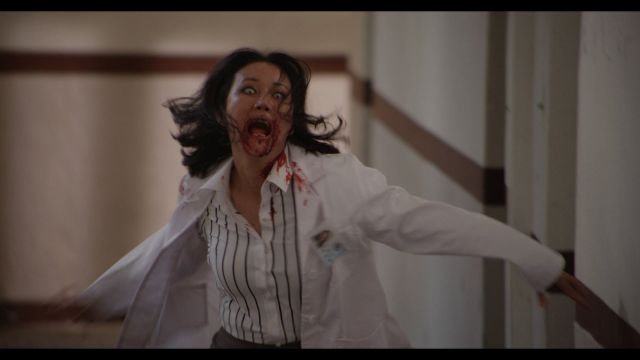 Generally speaking I don't consider the festival environment to be an optimum one in which to watch movies- the temptation to watch way too many movies in a single day is really tempting, and it's easy to get fatigued by the constant reappearance of certain stupid tropes. "Zombie School" is an odd piece of work. Watching it at the Bucheon International Film Festival this year, I realized this is the rare film that works better in an oversaturated marathon film environment than anywhere else.

The movie reminded me a lot of "Let Me Out", in that this seems like exactly the kind of movie the main character of that film would have ended up making. Sure, zombie films seem fresh and inventive, and there's so many interesting ways to use the metaphor of the undead to represent...some other thing. But an idea that works on paper looks, in execution, incredibly stupid. Zombie pigs brought back to life by foot-in-mouth disease? Brilliant!

Except that the screenplay realizes at one point that there isn't actually any coherent way to bring the topic up. When the characters figure out the source of the zombie epidemic, it quite literally changes nothing about the situation at all. The only result is a character emphatically going- oh yes, we sure have learned something haven't we. What a metaphor this is for the way we mistreat the students!

And from there, "Zombie School" gives up any pretense of seriousness and devolves into full-on parody, where characters suggest and then do ridiculous stuff for absolutely no reason other than the fact that it's a genre convention. There's an armed soldier at the school who exists, as far as I can tell, solely to be the catalyst for exactly one silly overwrought emotional gesture near the end. It's that arbitrary.

Make no mistake- once "Zombie School" gets dumb, it knows that it's being really dumb, and this sense of authenticity is the only thing saving the movie from being just plain bad. I really have to admire the pluck of a film that realizes it really hasn't managed to develop its characters into interesting people at all. So "Zombie School" instead turns its own badness into a meta-joke about the abortive efforts of films trying to get audiences to care about random people with almost no personality dying arbitrarily.

"Zombie School" was the first film I watched at Bucheon this year, but I probably would have liked it more coming at the end, when I had seen far too many films unironically try to force romantic subplots, social commentary, and manly bravado into situations that in reality just came off as absurd and ridiculous. Certainly I kept thinking back to it as a reference point, like, hey, remember when "Zombie School" made fun of that dumb thing that just happened in this movie? How anyone else would rate this movie I don't know- it probably depends on how much you love / hate horror movies and the tropes that make them up.