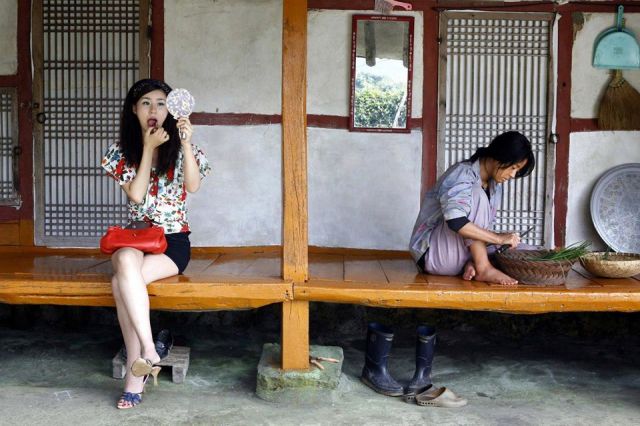 Jang Cheol-soo's second feature "Secretly and Greatly" is currently closing in on 6 million admissions at the box office, but before it goes any higher I wanted to zoom-in on my perhaps my favourite scene in modern Korean cinema. The above image is taken from "Bedevilled" (2010), Jang's debut film after having assisted Kim Ki-duk with "Samaria" (2004) as well as "Spring, Summer, Fall, Winter... And Spring" (2003). "Bedevilled" was one of earlier Korean films I watched, and it set the bar high in terms of its stunning cinematography and visual story telling. Jang's psychological horror made its premiere at the 2010 Cannes Film Festival and won a string of awards from Korean organisations (including four 'Best New Director' awards), but sadly only sold a little over 160,000 tickets during its run in theatres. The film was a critical success, and if you're talking about Korean revenge films, "Bedevilled" is one of the most hellishly satisfying thrills out there.

To quickly set the scene: "Bedevilled" follows Bok-nam (Seo Young-hee), a young woman stuck in a vicious cycle of abuse on a small island community. The elders (spearheaded by Baek Su-ryeon as a wicked and cruel grandmother) despise and heavily ridicule her, and she lives with her abusive husband (Park Jung-hak); all regard Bok-nam and her dreams (or even thoughts) with contempt and disgust. The pressure valve in the story is her childhood friend Hae-won (Ji Seong-won) who, after feeling the stress of her hectic mainland life, decides to visit her childhood memories with a trip back to the island. It is through Hae-won that Bok-nam is able to persist with the berating and beatings she gets on the island, and when her hopes of leaving with Hae-won are dashed, Bok-nam's rising anger boils over in rage. The result is the bloody slaughtering of her tormentors as she unyieldingly silences them all one by one in style on her way to the mainland.

In this scene, Bok-nam (Seo Young-hee) and her husband's mainland fancy are shown 'sharing' the frame after the infidelity. There's so much going on here that it remains one of favourite images in modern Korean cinema. The literal divide provided by the wooden beam makes each character available for comparison with the other. Skin tone differences, for example, can be noted and mark the social class difference between the young city girl's white skin and that of the sun-soaked Bok-nam. Similarly their shoes show the stark difference between their lives and attitudes, as the fashionable high-heels pose elegantly against the, also blue, gumboots of Bok-nam. The call girl proudly occupies the classy blue heels as she touches up her lips in a hand-held mirror. However Bok-nam, in her shame, leaves her work boots inhabitant and pulls her legs up into her in a defensive gesture as she continues her choirs. Here the working girl's confidence and status is contrasted with Bok-nam's insecurity and shame-all captured in one well-crafted moment in space and time.

Bok-nam also appears to be framed-within-a-frame, illustrating her confinement to the tedious choirs and sufferings she is expect to endure from the other islanders. The prison bars the door behind her ironically suggests this, but their position relative to Bok-nam (background not foreground) hints at her later decision to shatter the fantasy of control she thinks her husband and the island elders have on her. Interestingly, similar 'bars' appear behind the prostitute, but are askew and don't directly 'imprison' her like it does Bok-nam. However consider the angle of her perspective given that she is looking into her hand mirror. At that angle, she would perhaps be seeing herself in the same manner in which the spectator is seeing Bok-nam, trapped with bars behind her. Bok-nam's side of the frame is also very cluttered and practical. The objects that surround her act as symbols of her frustrating and domesticated life. The other side of the divide is simpler, uncluttered, and unburdened – the life of the working girl. Such little nuances add fascinating accents to the bigger picture and provide interesting depth to Jang's piece.

There's a lot to love and think about here, and so much of "Bedevilled" was crafted with a similar attention to detail. Those who have seen the film will also struggle to forget a number of its memorable, and disturbing, images. 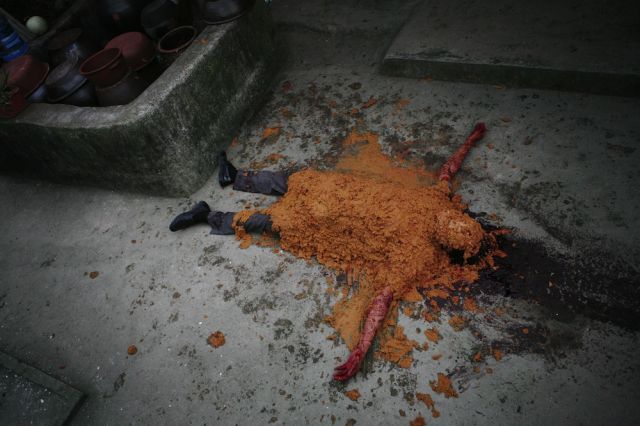 What are your thoughts on Jang Cheol-soo's "Bedevilled" and this scene? Do you have a favourite moment from the film?