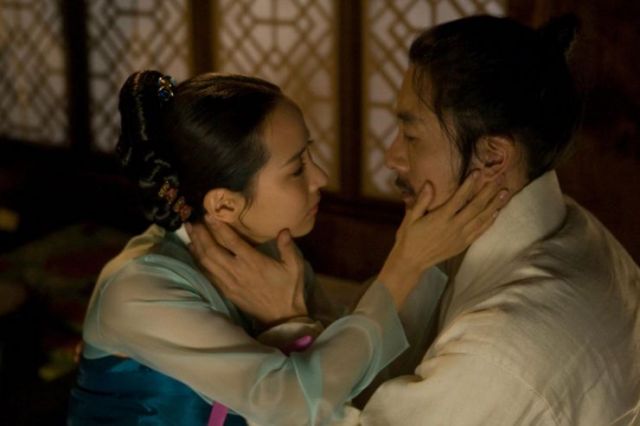 I don't know what it was exactly about the sex scene in Kim Dae-woo's 2010 remake of the "The Servant" that captivated my interest and senses. Perhaps it was the enchanting realisation/sexual release of the film's own internal eroticisms and sexual pressures or, admittedly, the 'cinematic purity' of the act itself as expressed through both the Choon-hyang's erotised body. Indeed, Cho Yeo-jeong's physical facets, and willingness, have contributed to her popularity as an actress both in Korea and abroad. I am not, however, so brave as to say that she might have inadvertently typecasted herself as Korea's own cinematic exhibitionist, but her recent role in Kim Dae-seung's "The Concubine" seemed to play off that image as an 'erotic icon' as her sexual agency was, once again, commodified through another historical Korean drama that taunted and teases its way through the prickly plane of sexual representation.

"The Concubine" did not, however, managed to encapsulate the culture depth and erotic significance of Kim Dae-woo's modernised enactment of the Korean myth of Chann-hyang. In fact, the representation of sexual acts in recent years has seemed to be unable to transgress from Korea's own modern conservatism. Instead Korean cinema has shied away from the depiction of sexual acts, choosing instead to localised sexual agency in the 'social spaces' of Korean cinematic discourse. This is not to say that Korean cinema's depiction of sex and sexual acts requires more flashes of flesh, not at all. Instead what we are seeing play out is a complex negotiation between Korea's own national sense-of-self and how that is problematised within the current discourse of trans-nationalism and global identity.

In Kyung Hyun-kim's "The Remasculinisation of Korean Cinema" the issue of psycho-social sexual discourse within Korean cinema is comprehensively encapsulated through an array of interesting case studies. The essays within contain a strong argument for how modern Korean cinema has had to re-constitute the sexual discourse of agency within the framework of modernism and the post-colonial gaze. Suggesting that Korean cinema after the 1980s saw a resurgence of male authority and their position of power with contemporary Korean culture. In his introduction Kyung outlines this phenomena as follows:

"The New Korean Cinema of the last two decades has increasingly pursued themes, characterisations, and narratives that centre on a particular notion of subjectivity: the image of an individual modern man desperate to free himself from institutional repression, familiar responsibilities, and personal anxieties"

Recent Korean films such as "Masquerade", "The Concubine" and "The Scent" suggests that the re-masculinisation of Korean cinema is still riddled with the anxiety and institutionalised 'othering' of the Korean male within traditional modes of sexual representation. While perhaps issues of male identity and potency within Korean culture once struggled against the front lines of modernity and Korea's "Westernisation", Korea's more immediate cinematic offerings seem to have withdrawn from the socio-political progression and re-imagining of male sexual authority discussed in Kyung's book. There seems to be a reluctance to flaunt cinema's predisposed gendering of the camera's gaze as Korea's own trans-national sexual identity is showcased on the world's stage.

The comparison between other national cinema movements (such as New French Extremism or Europe's trend to default to post-modern rendering of neo-realism) seems unfair in this regard; but the degree to which Korea's own national cinema differs/corresponds to international trends is symptomatic of the rapidity through which Korea has advanced within the globalised world it fought so hard to become established in. Issues of the female body, national victimisation, male impotency and the rise of feminism both in art and cultural, leads this discussion towards a more 'open world assumption' on sexuality and power relationships that constitute its being and becoming in Korean films.

Consider the process of sexual engagement in most Korean dramas. Our male protagonists all seem to possess a 'fatal flaw' of inadequacy that is circumnavigated through the recent rises in female agency and independence on screen. No longer is the male hero endowed with power to possess and successful procure the objectified female; rather the process of sexual exploration and satisfaction is mediated between the male insecurity, competency, sexual anxiety, and a newly place power of femininity and their own sense of sexual empowerment. 'Womanhood' is this light has been, albeit through the subversion of cinematic projection, task with embodying Korea's own progressive idealisations of equality and gendered sexual homeostasis.

This all takes places through Korea cinema's own contemporary narrative characterisations and discourse. Woman as sexual 'objects' are paired with an alluring frustration and represent both gratification and the shame of male conquest. The result is the contrast between 'interior' and 'exterior' sexual representation of engagement and wish-fulfilment. Rarely is the act of sex itself portrayed on screen, and when it is the parameters through which it is realised are suggestive, implicit manifestations of desire rather than complete dominance of the female form and body. The explicit acts that we find in film's like "The Servant" seemed to have, in retrospect, hit the 'glass ceiling' of Korea's own conservatism and rigid social-sexual expectations.

Male anxiety in Korean cinema also speaks to the rise of subversive feminist concerns, as the psycho-sexual agency is problematised within Korean cinema under the guise of male 'appropriateness' and hyper-masculine orientations and needs. To display and dominate, even forcefully engage, the female form is to acknowledge both the current 'lack' of male potency, as represented by sexual enactments and the chase, and the female object as something other than that which can be possessed. In this vein it is common in Korean films to see contrasting male identities that are marked but the gendered context in which they exist. Groups of Korean males are often seem to hold themselves to some extended sense of 'hyper-masculinity" as they playfully threaten and 'mock charge' their peers. All the while presenting the chance for the male viewers to 'over-indentify' with their manliness and the idealised patriarchal order embedded within their national identity. However that shell of masculinity is subverted when, especially in Korean dramas and romantic comedies, the female object is declared as desirable. The 'pursuit' of the female form, and subsequently the pleasure they represent, is shrouded in a 'fetishistic disavowal' of sorts as the anxiety/desire of patriarchy order attempts to safeguard contemporary Korean sexual identity and discourse.

The female object in Korean cinema constantly challenges the male right to possession and dominance. The protection of the female's chastity thus becomes the concerns of both the male and female, this 'cat-and-mouse' interaction that appears to always precede any sexual gratification and is a hallmark of Korean sexual cinematic discourse. Here Korea's contemporary perspective on sexuality can be questioned and examined, as both male and female entities negotiate the 'safeness' of their encounters. Here I am referring to Korean cinema's apparent need to almost 'save face' on the silver screen as sex is represented not so much through the depiction of bodies in motion, but rather through projection and sexualised abstractions of the act itself. Off-screen 'action' is often favoured and serves both as a conservative self-serving phenomena, and, perhaps more paradoxically, projects the illusion of both male authority, sexual right and the empowerment of this newly constituted female order and prevalence with the power-structure of the spectacle.

The question I wanted to raise with these points is that is Korean cinema being too safe with sex and its representation within the mainstream circuit? Korea has undergone such rapid changes over the last 60 years that is it hard to imagine how such a traditionally conservative nation address globalised issues of gender, sex, and power. Recent news reports have shown that gender equality and the social status of men and women is under threat, with an increasing intolerance for sexually related discrimination and gender-based social structuring. Woman are throwing back comments on buses and trains when they feel they are being objectified and even openly challenging social hierarchies and patriarchy. Issues of female identity and empowerment have filtered into Korea's cinema and the results and the responses from both sides of bed have been fascinating. While male anxiety and apprehension over the future is almost palpable, Korean woman seem to be exercising their right to fall on either side of their cultural 'objectification'; either asserting independence and a newly found social sense of power, or embracing their objectification in service of their own needs and desires. Indeed the course of sexual politics within Korea is in a clear process of becoming, as the struggle between national identity and the social make-up of sexual discourse and agency continues to present new challenges to filmmakers and their audiences.