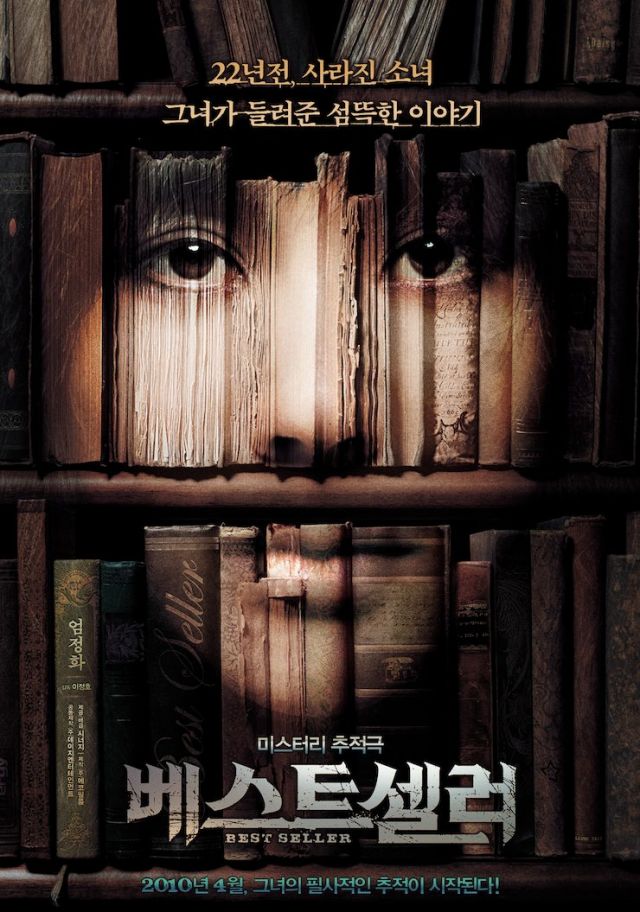 Despite its initial promises of intrigue and suspense, "Bestseller" (2010, Lee Jeong-ho) was not able to weave a coherent narrative by the time the credits rolled. The film can almost be divided in half as its tone and pace shifted awkwardly. The result is a very unsatisfactory conclusion to a film that had the right elements but failed to mesh them in any meaningful way.

The film is apparently up for a Hollywood remake, possibly under the guidance of the Korean-American producer Roy Lee. With more subtle construction and a rehashing of some of the plot elements, "Bestseller" might still be the film I had hoped it would be.

The Story and Characters

Uhm Jung-hwa plays Baek Hee-soo, a bestselling author whose career is in jeopardy due to strong plagiarism claims. Baek vehemently denies the allegations but yields to her publisher's suggestion of taking some time to regroup at an old house in the country with her daughter Yeon-hee (played by Park Sa-rang). Despite her tarnished image, the small town welcomes her in the hope that this bestselling author will help reinvigorate its image.

Baek is crippled with a serious case of writer's block. She tries to keep to herself as she battles to find a spark for her next novel. The days go by with nothing to show for her struggle. Just when inspiration seems to have completely eluded her, she starts to take note of her daughter's strange conversations with her imaginary friend. Baek first tries to discourage Yeon-hee's disturbing interactions but as she becomes more desperate for material, she begins to probe her daughter for details. The resulting book is well received back in the city but its success is short-lived as she is accused of plagiarism once again.

Adamant of her innocence, Baek torments over how her daughter's encounters at the house could possibly result in her plagiarising the novel. It is at this point that Baek's psychological conflicts surface as we discover a hidden tragedy in her past. A plot twist that is akin to that of "The Sixth Sense", but handled with much less finesse. The film's retrospection on this plot twist feels more like blatant trickery than skilled cinematic misdirection, and it was here that the tension begins to sag.

Our protagonist then returns to the rural town to investigate the matter further. The townsfolk are less welcoming this time around, as Baek's murder mystery novel set in their town did not paint them in the positive light they had hoped for. Her inquiry unravels a dark truth to her tale, a discovery that leads some past townsfolk to return and ensure that the truth remains hidden.

"Bestseller" tries to do too much. The film has two distinct tones and our attachment to the characters does not transfer from one plot twist to the next. This jolt is disconcerting and persists throughout the film's laughable and vapid climax. Uhm Jung-hwa managed a decent performance, especially considering the unnecessary complexities of her character. Ultimately, my biggest qualms are its bewildering change of mood and its fumbling final scenes.

Please feel free to comment on this review. Discussions are welcomed.

Available on DVD and Blu-ray (HK) from YesAsia