[HanCinema's Hall of Fame Review] "Save the Green Planet": The End is Nigh 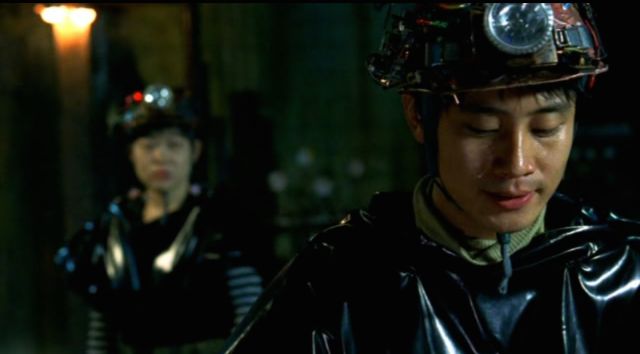 In the Spotlight this Week: Jang Joon-hwan's "Save the Green Planet"

Aliens, kidnapping, and torture make for terrific film fodder, but a balance must be struck in order not to over/undercook this volatile cinematic concoction. Too much comedy and the intensity may be compromised, and if the horror is left to broil the dish may become too dark to digest. We might assume that, given the country's hesitancy with science fiction, and its tendency to over-salt on silliness, that Korean cooks may be ill suited to even supervise such convergence. But a brilliant balance was indeed found when, in 2003, director Jang Joon-hwan made his daring debut with the delightfully delirious "Save the Green Planet".

Jang's opening act was reportedly inspired by the film adaptation of Stephen King's "Misery", and theories that Leonardo DiCaprio is, actually, an interstellar stud tasked to seduce Earth's Women into weakness. It's at times rather bleak and disturbing and when it's not depicting torture it suggests it (a steamy steel enema anyone?), but lurking beneath every sick sequence or sadistic act lays a latent laugh waiting to burst through. It's chuckles aren't as overt as Oh Young-doo's "Invasion of Alien Bikini", but what both these films do well is finger that golden mean as they cook their curious creations to perfection.

Byeong-goo (Shin Ha-kyun) is convinced that the CEO of a large chemical company is, without doubt, an alien. Specifically, Byeong-goo believes this suit is an extraterritorial from the Andromeda Galaxy who is only days away from having his mother ship arrive to obliterate the Earth. Our hero's theory is not unfounded, he's spent years preparing, researching, and observing this would-be alien prince, but with time now running out he (with the help of his soft-headed girlfriend) takes possession of his target/obsession in order to save the world from destruction.

Our hero first neutralises his alien's ability to communicate with his kind (by shaving off all his hair--obviously), then weakens his powerful telepathy (achieved by applying a stinging chemical to broken skin on the feet, groin, and in the alien's orbs), and finally proceeds to torture this poor creature with probes, electrocution, starvation, dismemberment and other charming (perhaps less well-researched) methods. But Min-shik (Baek Yoon-sik) is strong and persistent, and refuses to acknowledge the seemingly absurd claims being thrown at him, but eventually both break in one way or the other.

Jang's stars perform admirably under the pressure of such a character-driven film, and the pace at which this pot boils is crafty and apt. The film also contains an impressive variety of technical techniques that, like any good film should, remain largely invisible if your note searching for them. A well timed dolly-zoom here, a flashed P.O.V there, and while the special effects where budgeted blemishes, they were excusable (even acceptable) when consider the film's own aims and promises.

"Save the Green Planet" is a pessimistic plunge into madness and mania. Through all the horrific acts and bloodshed one is never really sure which side to support, and that's exciting. Is Byeong-goo mankind's saviour just doing the necessary dirty work? Or is Min-shik the unfortunate victim of an alien-obsessed lunatic with a deadline to meet? Jang pushes and pulls his viewers between these polar positions and the teasing/torture we endure to get to his final confession is well worth it.