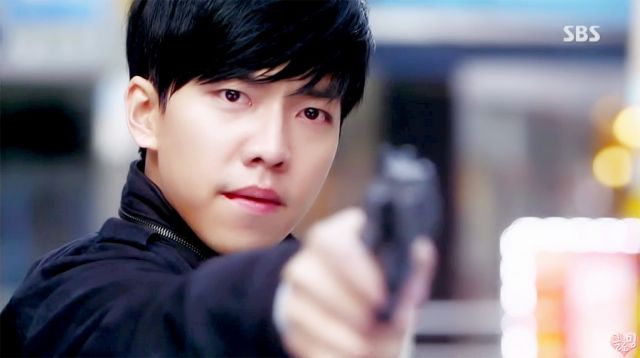 Lee Seung-gi is an idol actor that has worked hard and made a name for himself in every branch of the industry he has worked in. As a solo singer he is a solid performer who has always done well on stage and in his music videos. As an actor he has worked in multiple genres. As an MC he has found continuing success. What is it about Lee that appeals to the masses? What made his transition from singing to acting so strong?

It is Lee's work ethic and general relatability that makes him so successful. He looks and acts like the boy next door. He has a clean public image, which is very important in Hallyu. His earnest portrayals of his characters allows him to reach the masses even if his technique isn't as solid or as strong as it could be. He shows improvement over time, especially in subtlety. That improvement is due to his intelligence and the thoughtful preparation he puts into his work. It gives him almost certain longevity in acting.

Lee's first leading role was in 2009's "Shining Inheritance" as the quintessential prickly male lead, Seon Woo-hwan. Lee showed an affinity for the camera even though he tended to overact, especially during scenes of anger. This habit trended through many of his dramas save for his latest, "You're Surrounded". The emotions are clear, but seem overwrought, as if geared for the live stage rather than in front of a camera. This is most evident in "Shining Inheritance" and tones down in each subsequent leading role that he landed. Again, it is Lee's earnest portrayals of his characters that make him so well-liked despite any flaws he may have as an actor. It's his appeal that keeps the role offers coming.

"My Girlfriend is a Gumiho" from 2010 was Lee's real breakthrough as an actor. He worked beside from the very nuanced actress Shin Min-a from whom he learned a lot. His scenes with her were the most natural he had been on screen until that point, showcasing an excellent ability to learn from his seniors. Lee's tendency to overdo emotions is perfectly suited to comedy, which is where he excels, and what his role as Cha Dae-woong required. When more serious acting was required, Sin reigned in Lee's enthusiasm. With other actors he wasn't quite as solid. Sin's influence began to really show near the end of the drama when Lee really began to have an effect of his own in scenes. He wasn't just reactionary.

It was 2012's "The King 2 Hearts" where Lee began to stand on his own. He was surrounded by a cast of veterans who brought out the best in him. He brought out the best in them as well. It was especially with actor Cho Jung-seok that Lee began to portray an inner calm during the more serious scenes that he carried with him into "Gu Family Book" and "You're Surrounded". The subject matter in the show is also very heavy and very real to the South Korean actor, which perhaps played a hand in his more grounded acting.

Lee also has a knack for picking good roles. Each of his dramas has found success and the same is true for his next drama, 2013's "Gu Family Book". Not only did the role of Choi Kang-chi offer Lee an acting challenge, but it was also a physical challenge. He had to fight a lot and show a fierceness not required in any of his previous roles. At the beginning his gumiho portrayals, the scenes where he needed to be animalistic, were a bit awkward. But, as is the trend with Lee, time passed and he improved. He offered a sadness to Kang-chi that was poetic. Had he taken on a role this this earlier in his career he wouldn't have been as effective. And, as always, his portrayal was relatable. That is Lee's key to success. What he needs to latch onto is a rawer method of acting; a grittier, less safe way of expression.

Lee almost gets there in his latest drama, 2014's "You're Surrounded" where he plays an emotionally damaged orphan seeking revenge. His acting is the strongest it has ever been as Eun Dae-goo. He has years of experience behind him at this point and the confidence to execute the role cleanly and effectively. After this role, the direction Lee needs to go is to completely give himself up to the moment. He needs to be unafraid to get dirty and ugly in his acting. He isn't necessarily a safe actor. It is more than he hasn't quite been able to totally relax, almost as though he thinks too much. This is not something that can't be fixed. In fact, I think Lee has a bright future in front of him and one day we will see him in a role that steals him away from reality and turns him into whatever character he portrays on camera.