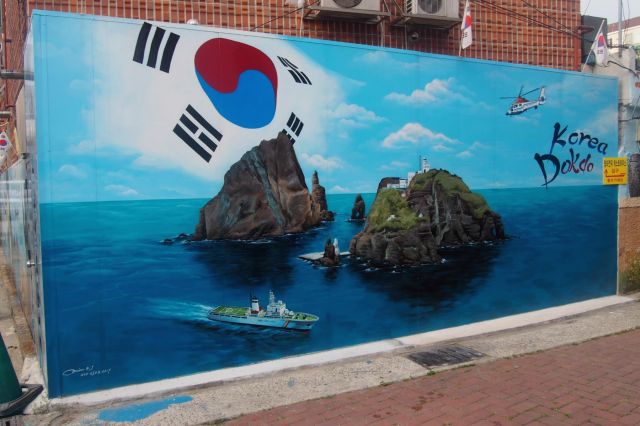 Ah, the knick-knacks...while I'm not a fan of big cities in general Daegu consistently did a decent job of impressing me with odd curiousities that could easily be found around every corner. This isn't Seoul with its constant divide of "crowded urban area" versus "boring residential neighborhood". No, Daegu is the kind of place where a serious street art memorial to the international Dokdo dispute of all things can pop up out of nowhere. While I'm pretty indifferent to the Dokdo issue in general that's some pretty rad patriotism, you know? 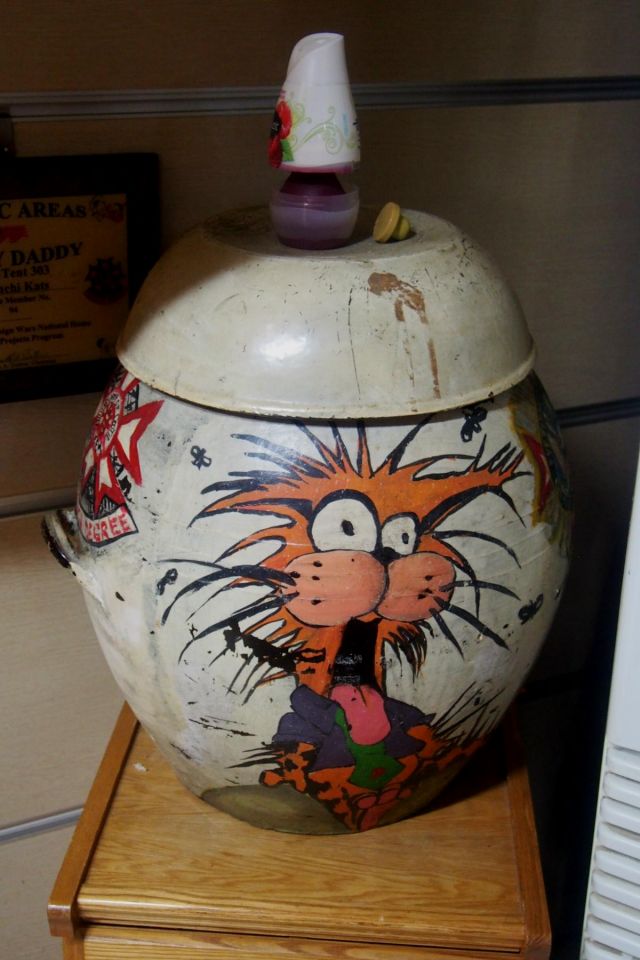 Unfortunately this bizarre object (a traditional Korean pot plastered with Bill the Cat from Bloom County) is not available for public sightseeing- I snapped a photo of it at Daegu's local VFW bar- that stands for Veterans of Foreign Wars, open only to veterans and their guests. Strictly speaking I'm not sure you're actually allowed to take photographs at VFW bars but when was I going to get another chance to see this thing? Daegu has a fairly large American military presence so this isn't quite as out of place as it looks. 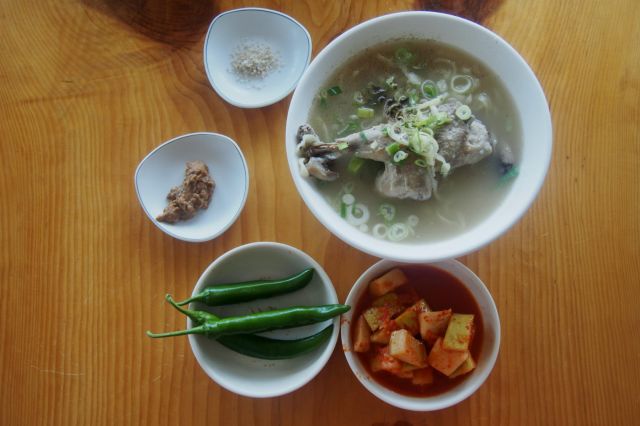 This is Chicken Stew (닭백숙) with the usual side dishes. These days old school chicken (옛날통닭) is all the rage- what that means is the chicken is presented in such a form that makes it obvious the meat came from a once living animal, bones and all. It might seemed morbid, but compared to what? Pretending like animals did not have to be killed so that we could eat meat? 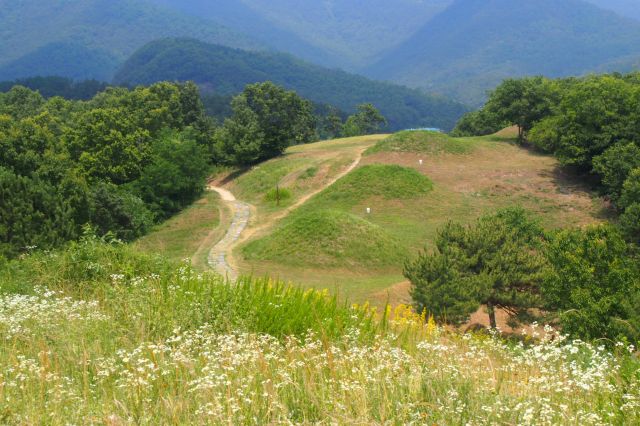 In general that particular restaurant was not terribly remarkable though. I only went there because it happened to be located right next to the Daegu Bullo Tomb Park (대구불로동고분공원). It's just a park with tombs all over the place. No one named or anything- theyr'e just a bunch of nobles who got their own mounds put up reasonably close to the city. I'm not sure whether this was really the best site for mourning because the region was so picturesque I kept expecting a singing nun to pop out from behind one of the trees. 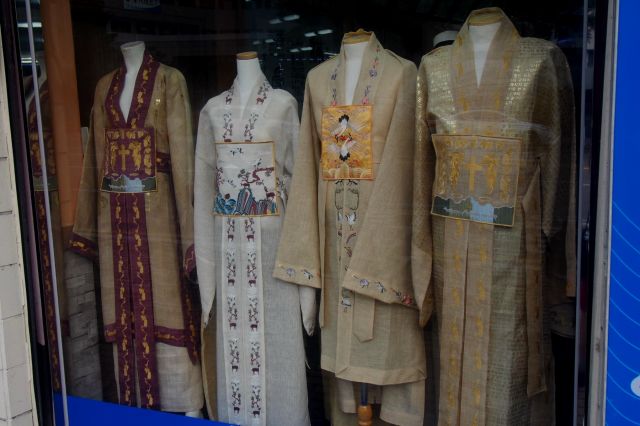 Stores that sell traditional Korean clothing are, from what I can tell, actually quite common anywhere that is not Seoul. What made this one get my attention is that these garments all have obvious religious themes- yet are also rather in step with Oriental artwork. I have no idea who would wear these garments in what sort of real life circumstance- maybe they're just cooler versions of regular traditional Korean clothing and I just don't see people wearing traditional garb often enough to make a better judgement than that. 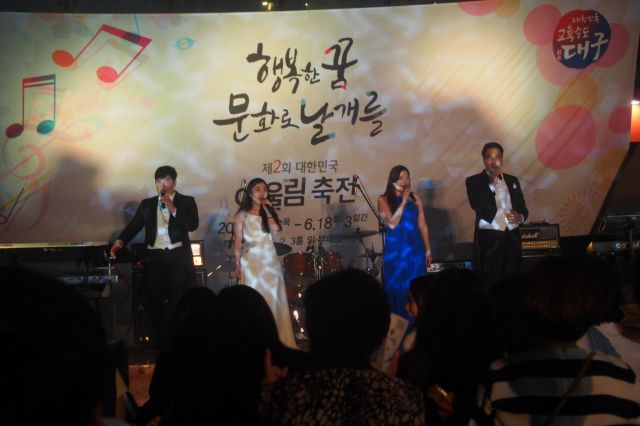 The main downtown section of Daegu has a lot of bright parts too. These are all opera singers singing for the sake of "wings for happy dream culture". Yes...I guess you'll just have to take my word for it that this sounds more intelligible in Korean. "Culture", when used locally, does not always refer simply to Korean culture, but rather any kind of culture that is good in some way, whether it be American European or African. Enjoying culture just means enjoying good stuff that's been around for a long time. 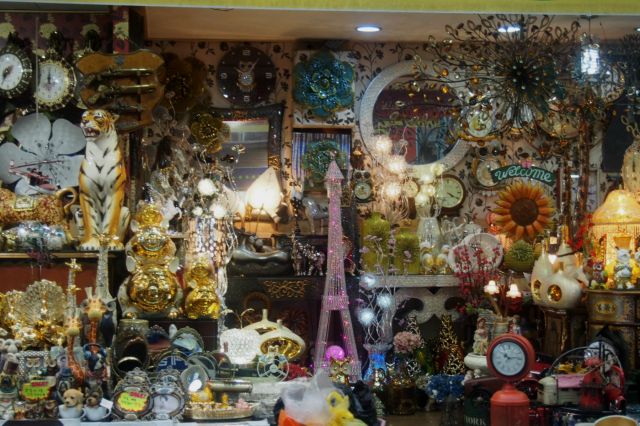 That for me is the main highlight of traveling around a country whose culture has existed for a long time. There's so much junk lying around that every random curio shop becomes a sort of fascinating museum. Daegu benefits from being a central focal point of the country with a large population to match while also being just barely irrelevant enough that there's still a lot of local control and authenticity. It's a pretty friendly fun place, even if the Korea's traditional kings and heroes didn't spent a lot of time hanging out here.