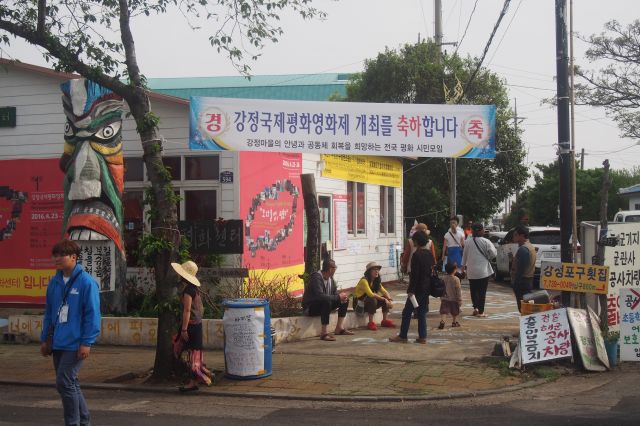 At long last, HanCinema's first film festival visited on the road! Up until recently I was living in Seoul and limited in options for what film festivals I could and could not cover. That life decision is over and done with, so I was free to impulsively grab a plane ticket to Jeju Island. I was prompted after learning that Gangjeong, the small Jeju village embroiled in a constant war with the South Korean government over an unwanted military base, would be holding its first ever International Peace Film Festival this year. I first heard about this struggle in the documentary "Mira Story" and have been keenly interested ever since.

The Gangjeong protests are a tad ramshackle, even if the activists are quite friendly with what they have. This is the not-so-secret hideaway from which police and especially soldiers are banned. It's where activists can eat their meals in peace, and I was invited in just as a general courtesy. Lest you think these people are paranoid, the day after I (and any other press) left Gangjeong, armed Naval soldiers were riding in a truck all around the village, including the front of the elemntary school for no apparent reason except to intimidate and terrify villagers. 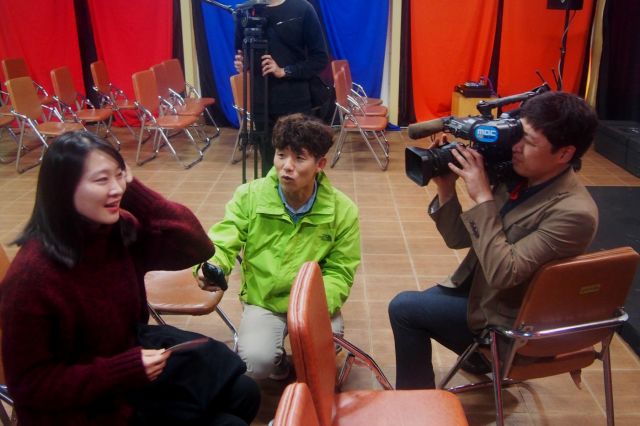 As far as I can tell no press stayed in town as long as I did. However, these reporters from MBC's Jeju branch did make a point to show up and take interviews. This particular woman (like much of the audience) became quite emotional during the morning screening of "Spirits' Homecoming", and so was questioned about just why that was. The Gangjeong anti-base movement is not made up of single issue wonks. The films discussed a wide variety of issues, from comfort women to Sewol to community destruction due to the Olympics and beyond to other international matters as well. 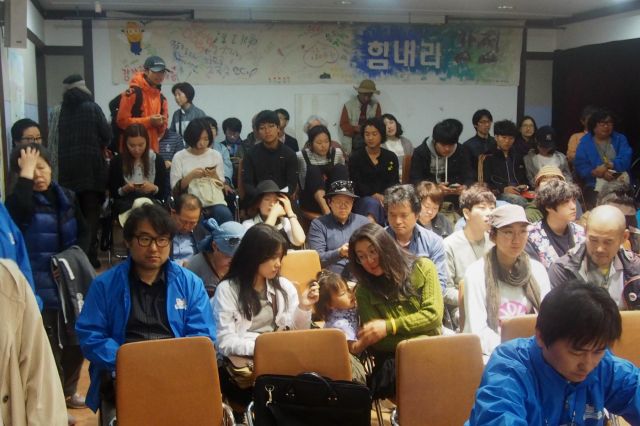 ...I should note, by the way, that the film festival was packed with spectators to a degree I would never have expected from a host town of only a couple thousand people in one of the more obscure areas of Jeju. Could this just be an illusion due to small venues and free tickets? Perhaps- but for a sense of perspective even at a big film festival like Busan weekday morning screenings are practically abandoned. And that's not even getting into questions of audience engagement. 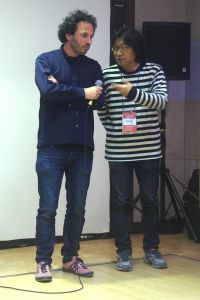 The above pictures are from a guest visit involving director Guy Davidi of Five Broken Cameras, an Israeli documentary which depicts the conflict at Bil'in. While the documentary was filmed, the Israeli government (with the usual threat of military force) partitioned Bil'in to give land to settlers. That in itself might not have been such a large problem except that the arbitrary line of the partition made it impossible for Bil'in residents to harvest many of their olive trees. Indeed, the construction project itself destroyed quite a few of them.

It's easy to see how the villagers in Gangjeong can relate- the naval base construction has already done serious damage to residents who used to make their living through deep-sea diving on the once pristine coastline. Used to be dolphins- now it's warships. And this translates into the passion these villagers demonstrate when given the chance to ask questions. What's more, these kinds of questions are quite a bit more unfiltered than what's seen at more commercial festivals. 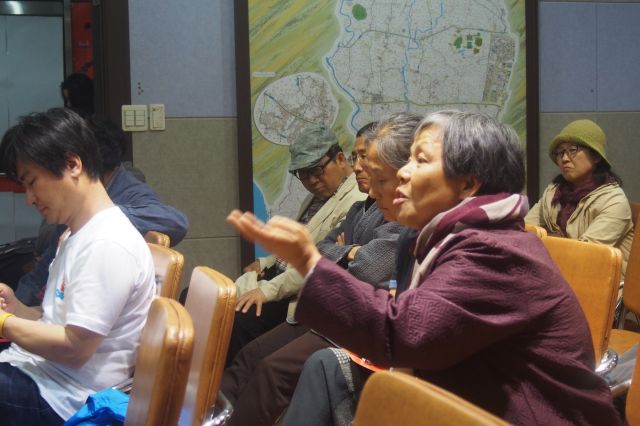 This woman, gesticulating so fast that the camera can't capture her hand, questioned Guy Davidi about why his film doesn't indict colonialist Western interests for artifically creating Israel in the first place. Guy Davidi, himself an Israeli, unsurprisingly disagreed with this characterization of the Israeli state. Yet one awkward laugh from the crowd and one polite answer from the director later, the world did not end.

Little events like this illustrate what film festivals should really be about- not the red carpet, or money, but rather the free communication of ideas. Gangjeong identifies closely with this film festival as a local event, one that affects all of them through the proxy of the naval base issue. Guy Davidi himself told me afterward the screening that these smaller events always convey that same passion- which is why he and so many other directors make a point of traveling to have these conversations. 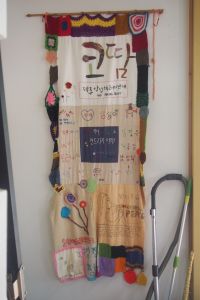 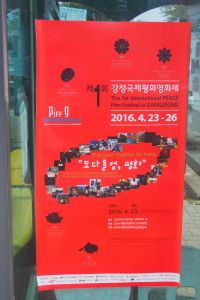 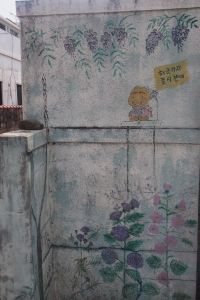