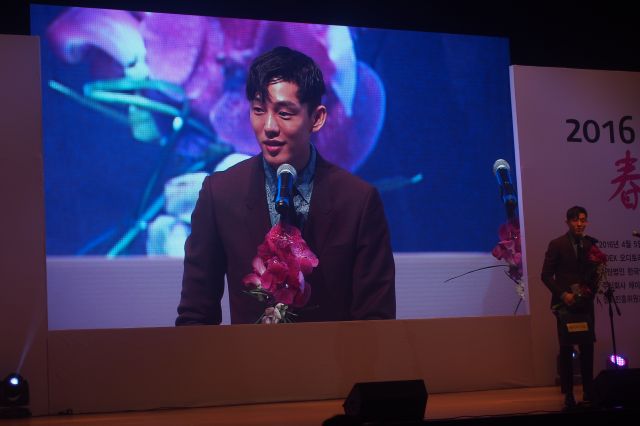 I had lots of reasons for going back to Seoul even though I didn't especially want to- the one I most want to discuss is the Chunsa Film Art Awards. Because I have pictures, you see, of Yoo Ah-in getting all misty-eyed as he accepts his top acting prize for "The Throne". Really, the man seemed absolutely touched that he actually won. Which seems reasonable. He was up against Choi Min-sik, Jung Jae-young, Lee Byung-hun, and Ahn Sung-ki. And don't say Yoo Ah-in won by being young and handsome, since that same night Ra Mi-ran of all people won the audience popularity award.

One helpful fact I hope these pictures illustrate is that even from a reasonably good seat in the audience (which I stole, seriously, I'm not that important), it's pretty hard to actually see anything that's happening in an Awards Ceremony. Just like the viewers at home, we in the audience mostly just stare at the screen in back knowing that smaller versions of that visage are nearby. So no, I did not get a nice close look at Park So-dam or Im Kwon-taek. Shoot, I didn't even get to see Mi Ram up close. That made me sad, since great as she is, I didn't think Mi Ran was an important enough actress to get presenter duty.

I might have made more of an effort except that the award planners made a critical design flaw- it took place at Coex, which meant that predictably everyone got lost on the way to the reception. Seriously, Coex is a gigantic maze. You might be able to find the aquarium or the casino on your own given proper effort, but a specific restaurant? Ha! There everyone was meekly following each other, hoping someone had some idea where we were supposed to be going. Those were the days...

Ah yes, and speaking of the good old days which weren't actually all that great, the Hyundai Department Store in Sinchon is running a special exhibition for the fortieth anniversary of "Robot Taekwon V" until April 17th. Yes, I know I'm not giving you all that much time to schedule an impromptu trip, but you have to understand, I find about this stuff by wandering around and getting lost, looking to random signs for some clue as to where I am. Then I get distracted by robots and the process repeats itself.

...Anyway, for those of who who don't know, "Robot Taekwon V" was a great Korean animation project designed so that Korean children, too, could have their own robot to love. While "Robot Taekwon V" has gone through several iterations and a live version was supposedly in serious development for quite some time, it yet remains an oddly goofy pop culture fixture of the seventies. And I'm thankful for that. Who needs serious edgy reboots when you can have something as simple as a robot who synchronizes with its pilot to perform Tae Kwon Do?

Yeah, much as I might complain about the place, there is in fact plenty of stuff to do in Seoul. Some places you can't get in, some are temporary exhibitions, and some are long-term. The short of it, though, is that if you want to do some exploring, odds are good you will run into something of interest by accident sooner or later. Even for me this likely isn't the last time I'm going to Seoul. 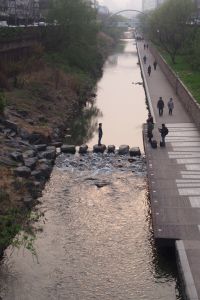 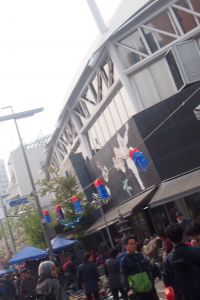 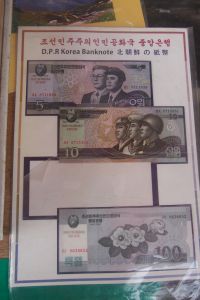