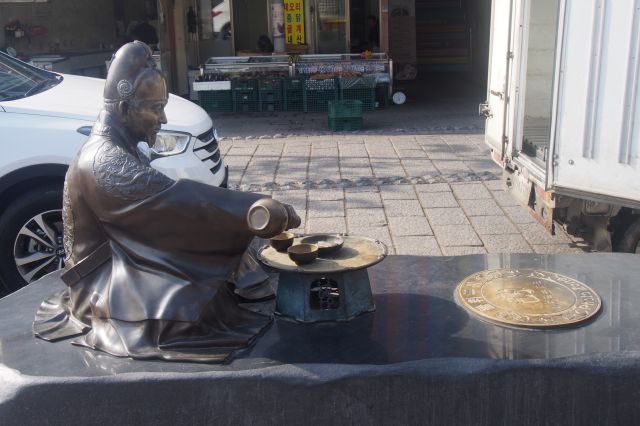 Away from the palace, Suwon is filled with little oddities. Like this King. Straddling the side of a busy street (really is quite impossible to take a picture without cars in the shot somewhere), this statue provides...a photo opportuntiy. No really, that's it. The little seal to the right is a Photo Zone. You or a friend sit there and pretend like you're just chilling out with the King while traffic passes by. In context it's all a little silly but hey, it is a pretty cool-looking statue.

These pictures are all from the Children's Culture Park (청소년 문화공원) in Suwon. Uh, I think. It's hard to give a definite answer on that because all I know for sure is that I took these pictures somewhere in between Paldalmun (팔달문) and Yeongtong (영통). I walked there, because in my experience the most interesting obscure places to go are those little spots in between random locations. The Children's Culture Park is not a tourist monument. It's just a park intended for children to play in, probably the ones who live in those high-rise apartments in the background. I imagine the kimchi jars are merely for decorative effect. 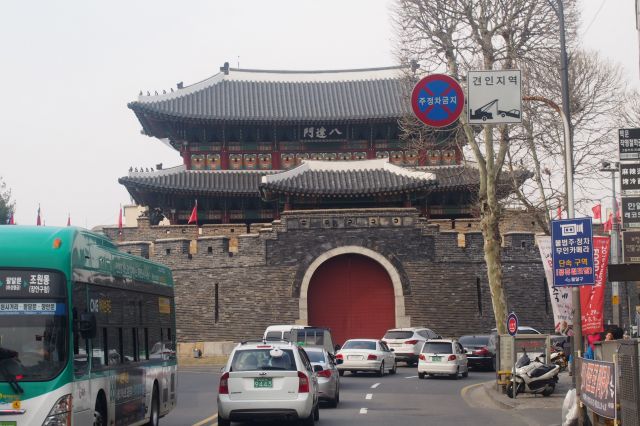 ...Speaking of Paldalmun (팔달문), here's a picture, just so you know what I'm referring to. Like Namdaemun, it's surrounded by roads. However, since the roads are smaller and the area in general is more commercial, Paldalmun has a much more intimidating presence than Namdaemun even though it's in fact a smaller building. Sadly, this same environment makes it nearly impossible to get an actual good photograph. By the way, 팔달문 literally translates as "eight moon door". At least that's what I'm choosing to believe. Chinese character translations can be tricky.

My goal in Yeongtong was to watch some movies that were going out of print anywhere else except the Yeongtong Megabox- which holds the curious distinction of having both an Art House G Cinema Extension, as well as a Kids Theater. But on the way there, politics got in the way. As it does pretty much every time every where there's an election in South Korea, buses with loudspeakers and color-coded political operatives were launching an advertising campaign.

Park Won-seok's campaign was unusual in that this is the only time this election I actually saw a candidate out with his party bus, shaking hands with the citizens. He's a member of the Justice Party, which at bare minimum has a pretty cool name going for it. They're only the fourth most powerful party (hence the number four), but even so, it's the man who's running, not the color, right? In any case, like his party, Park Won-seok placed fourth overall.

For food this time around, I tried a Chinese restaurant. In Korea, this usually means Jjajang (짜장), a kind of black sauce that can be poured over all sorts of delicious food. Usually noodles, but this particular restaurant offered a pork cutlet version, so that's what I ordered. Delicious, as expected. Jjajang is a hybrid culture food really, since I've been told that in China it's only really ever that common in Beijing. This makes it no different than, say, American Chinese food which is mostly unrecognizable to anyone from the mainland. Travel- it's how we find our commonalities, in the end. 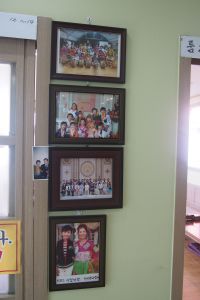 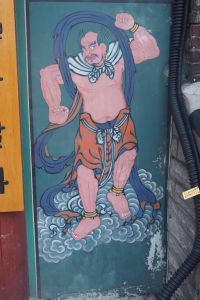 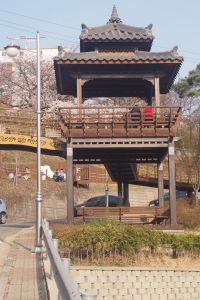