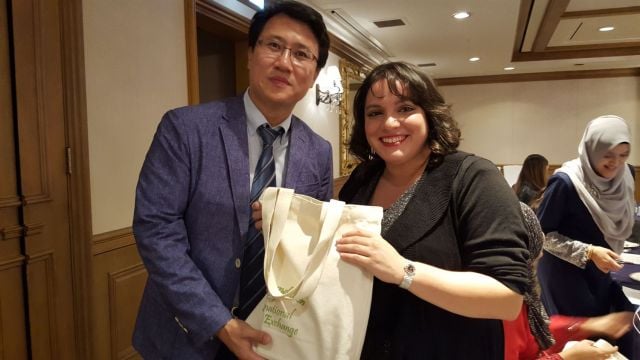 The very first day of the Korea Joa 2015 program began with a beautiful welcome banquet and ended with an interview of Director General Kim Deok-jung. The juxtaposition of work and play set the mood for the next nine days of the trip. It is what made the trip unique as well as successful. Director General Kim Deok-jung heralded the experience with his presence at the banquet and with his well-thought out answers in his interview with HanCinema. Read on for a transcript of our interview. We'd like to thank interpreter Cha Yoon-su for her invaluable participation as our interpreter.

HanCinema: Is the focus of the future going to be promoting cultural exchange within Korea or also bringing Korean culture and entertainment into the world?

Director General Kim: There are people who enjoy Korean Culture contents all over the world. In order to interact with them and the global fans it is essential to exchange and promote culture with the world. However, culture can't flow in one way. Since the year 2003 from the start of our foundation, we have always tried to promote interactive culture exchange. Therefore, not only did we promote Korean culture to the world, but we have also aimed to introduced various foreign culture's content in Korea. As much as we want to deliver our proud culture, we want to learn about other country's culture contents. Therefore, through this interactive culture exchange. we are trying to make better synergy.

HanCinema: Korean culture and entertainment are heavily promoted in Asian markets. Do you see good potential in US and European markets and do you plan more heavy promotion there?

Director General Kim: I believe that Korea's culture contents has sufficient potential to be successful in US and European markets. Although it's partial yet, several markets have already shown good accomplishments, so our perspective in US and European markets is quite positive. One of the popular magazines of England called Monocle, has mentioned that "Through the exports of Korea's mass culture starting from K-pop to drama, animations and computer games, Korean wave is the most impressive and successful case that is praised for 10 years to the world beyond Asia".

To help korean entertainment companies to move out to the global market successfully, [KOFICE] offers accurate information through various investigation and research projects regarding the foreign culture industry market. One of our projects which we conduct every year with more that 14 global fan clubs is the example.

KOFICE remains active in world markets and just as it brings foreign media outlets like HanCinema to Korea to explore Hallyu and the marvel that is Korean entertainment and its pervasiveness in the world, it also reaches out. August 29 and 30th of 2015 it collaborated with the Korean Culture Centre India in a program called "Feel Korea", one of the many programs KOFICE sponsors. After Korea Joa 2015 ended, KOFICE jumped into its next project, moving forward without pause in its endeavors to share Korean culture with the world. While spending time with KOFICE representatives Kwon Min-ju and Choi "Julia" Ja-yoon over the course of Korea Joa 2015, it was easy to feel the passion and see the efforts that they put into connecting Korean and other cultures. This is the beauty of the Korean Wave known as Hallyu - it connects people all over the world.

For more on this opening event, you can read our piece [HanCinema's Korea Joa] KOFICE Welcoming Banquet.