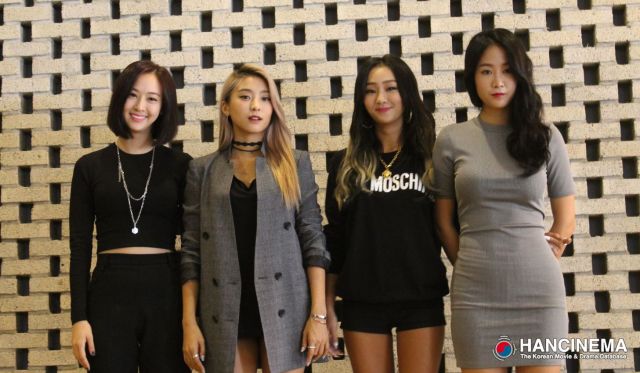 HanCinema's correspondent Lisa Espinosa got to sit down with super girl group Sistar on October 7, 2015. These ladies, Kim Dasom, 'Yoon Bora', Hyolyn, and Soyou, have had a big year. They released their fifth mini-album "Shake It" on June 22, 2015 and proceeded to shake up the stage at KCON LA two weeks later. Check out the interview to see what the four ladies of Starship Entertainment had to say about acting and rehearsing.

HanCinema: Have you learned any useful knowledge through drama experience that you haven't attained through your musical experience? Like a skill or a certain understanding that acting has taught you.

'Yoon Bora': There is a method technique, a technique that an actor has to sympathize fully with the character, that has helped her a lot with music performance.

HanCinema: How has your rehearsal/practice technique changed since your debut?

Kim Dasom: Our practice and rehearsal methods haven't changed. We are always trying to imitate our initial methods and attitudes to try as hard as possible to become the best. We haven't lost that yet so we are still trying our best to practice as we always have.

Thank you KOFICE and Korea Joa 2015 for making this interview happen. Special thanks to translator Julia Jayoon Choi, friend of Kim Dasom, for her work. A video of the interview is available below.