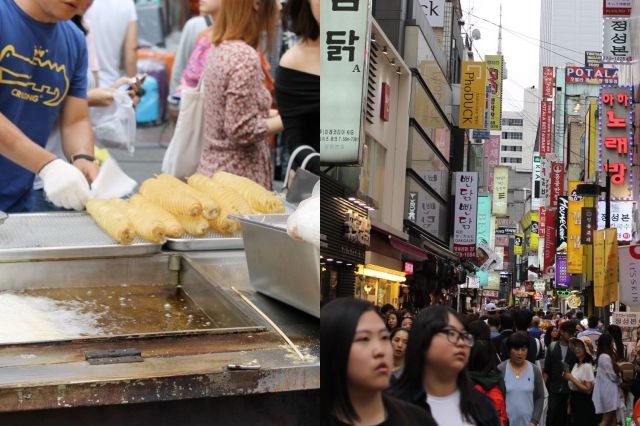 If there is one thing that can be said about Seoul, is that it truly is a city with something that will appeal to everyone. Its personality is multifaceted and deep. While parts of it rest, others come alive. There is always something to do, somewhere to go, and people to meet. Even cats, dogs, and raccoons await the friendly faces of tourists and locals alike in animal cafes. It is steeped in the rich history of Korea and flavored by the worldly wonders of Korea's immense expansion since its birth as a democracy. 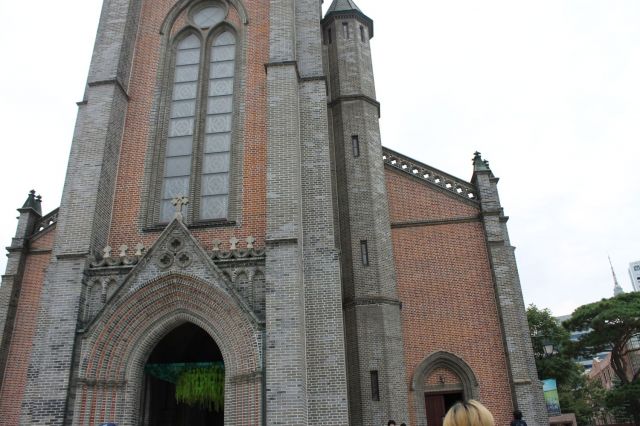 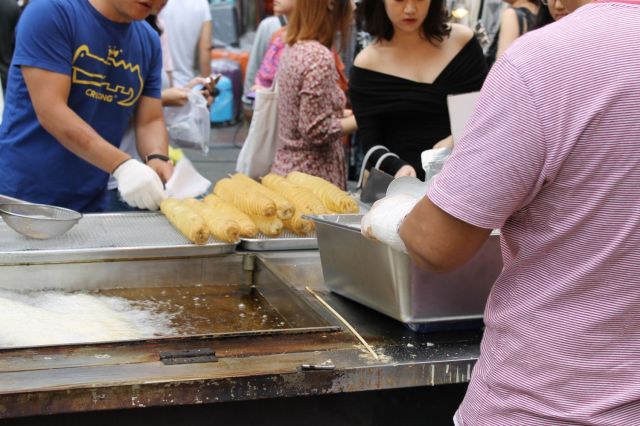 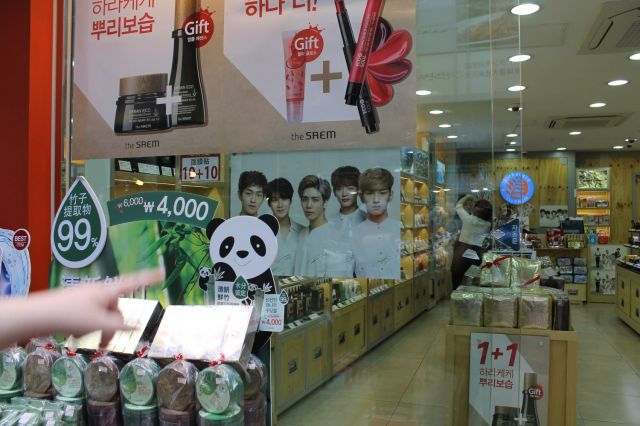 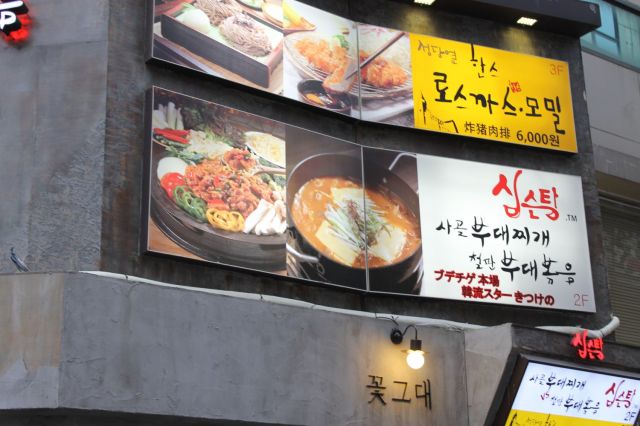 And I have to say: I loved Seoul with every fiber of my being. It's huge with so many different neighborhoods and personalities. It made me feel alive. One of my favorite places in the huge city was Myeongdong, a hip, colorful neighborhood full of shopping, food, and meandering people just off Myeongdong Station Line 4 and Exit 6. What is impressive is how such a small area can encompass such a mass of shopping like the famous Lotte Department Store that has made appearances such 2010's hit drama "Secret Garden" with Hyun Bin and Ha Ji-won. Innumerable restaurants made me want to stay and eat out every meal in order to try them all. Street venders that magically appeared just before nightfall sold potato chips dipped in tasty seasonings, dalgona, takoyaki, pomegranate juice, hoddeok, chicken kabobs and so much more.

My first venture to Myeongdong was before the start of Korea Joa 2015 with a fellow blogger, dewaanifordrama from Samsoon Down the Rabbit Hole. She's lived in Korea for just over a year and was a most awesome hostess. Like me, she is a foodie and together we indulged in the amazing eats on the streets and inside a few shops. At Leonidas, a Belgian chocolate cafe, I tested out a few of my hard-learned Korean phrases and ordered our drinks. I chose a tasty dairy-free hot dark chocolate (I'm sadly lactose intolerant!) In the streets we dodged fellow wanderers and people-watched our way up to Myeongdong Cathedral. You may know this important pillar of Korean Catholicism from dramas such as "Secret Garden", "You're Beautiful", "City Hall", and "Evasive Inquiry Agency". 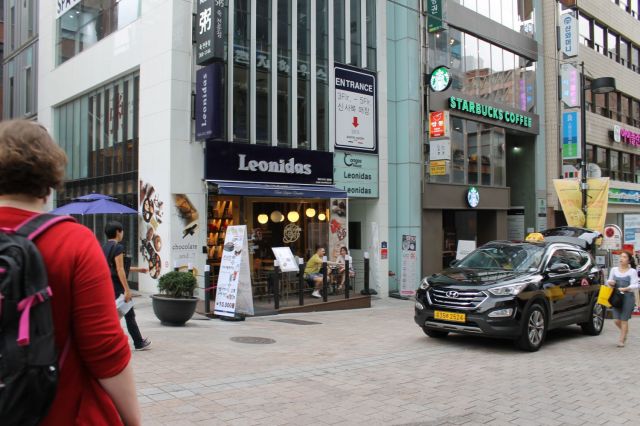 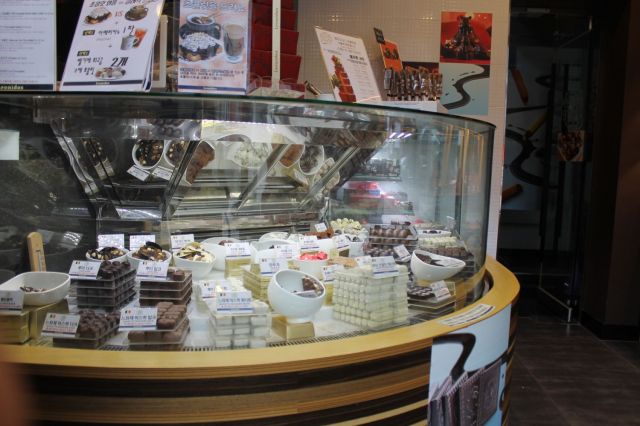 Part of the appeal of Myeongdong is watching the people as they go about their days. I caught glimpses of working wives and husbands supporting each other, fathers and their daughters goofing off together, and foreigners like me soaking in the wonders of the bustling streets.

While dewaaniifordrama and I perused we came across a man in a cat costume advertising a cat cafe. When I asked him where the cafe was, he waved me on and led me through the crowded streets to the Myeongdong Cat Cafe, found just off the main drag. I felt a bit like Alice falling down the rabbit hole as I followed the six-foot-tall yellow cat. We reached the cafe and my new cat friend directed me to the fourth floor. After leaving our shoes at the door and donning slippers, we paid ₩8,000 each for entrance and a drink from their expansive menu. I got apple juice because you can't go wrong with a classic. The kindly young man behind the counter sprayed my hands with disinfectant to protect the felines, handed me a bag to protect my belongings from curious cats, and instructed me not to take flash photography - kitties don't like flashes. 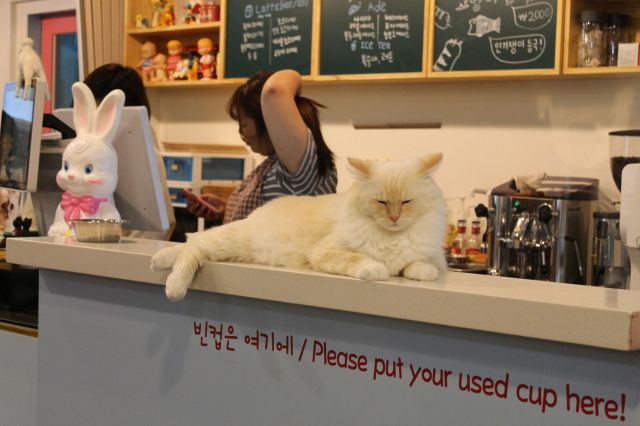 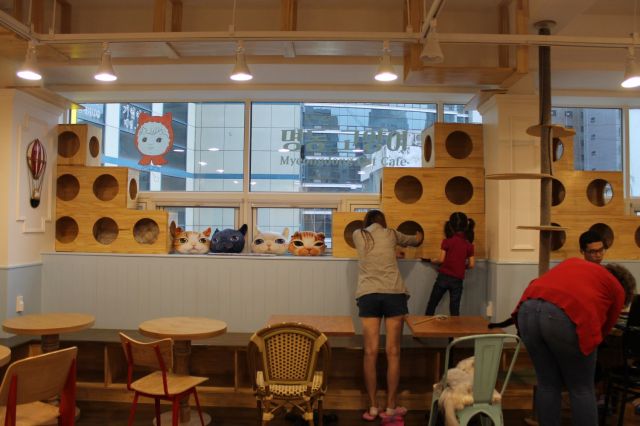 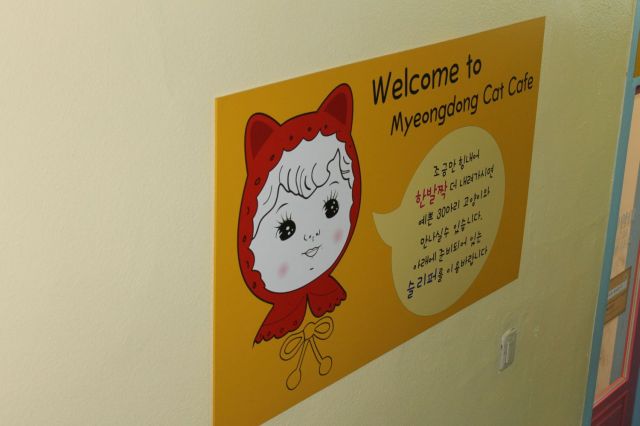 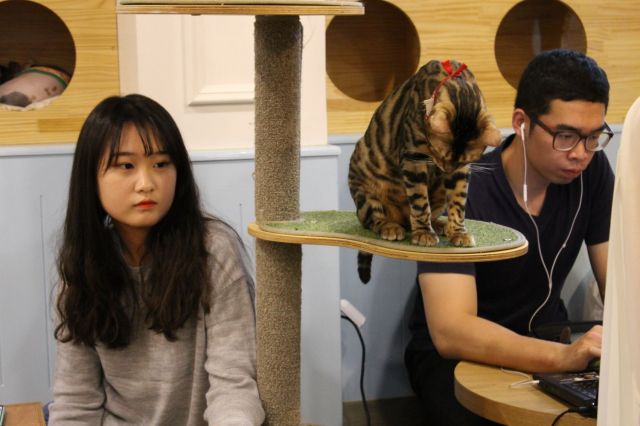 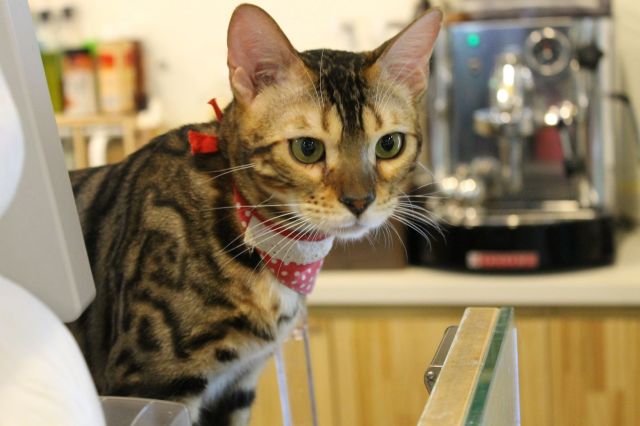 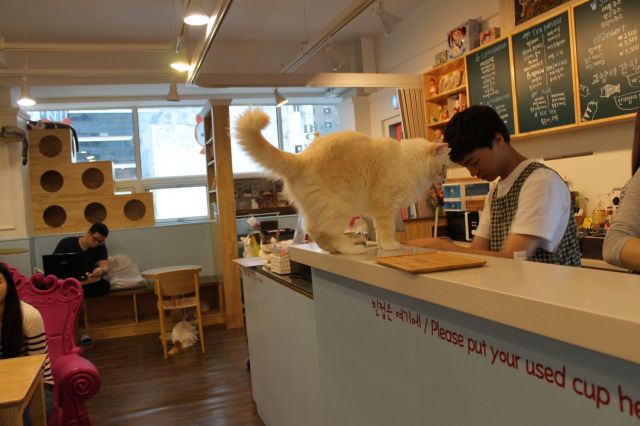 The cat cafe may have been my favorite experience of the day because the cats were people-friendly and playful with each other. They roamed the cafe at their leisure, sitting on chairs, climbing the rafters, and hiding in strategically placed kitty cupboards. Although full of cats, the cafe did not smell like them. Rooms off to the side housed their litter area and small, private spaces for any stressed out kitties to recuperate. About twenty minutes into our stay, the cafe employees released the kittens to play and they livened up the atmosphere even more. I am a self-proclaimed cat person - as I write this my tabby is warming my feet and my little Siamese is at my elbow. As such, this cafe is such a lovely experience with its calm aura and clever set up that is geared towards pleasing both its human and feline inhabitants. There are many tables with chairs, booths, and arm chairs to rest on as the guests observe and interact with the cats of the Myeongdong Cat Cafe. And, the kitties are SO CUTE!

There is so much more to Myeongdong outside of what I've just written. My experiences were just a slice of the proverbial pie. Luckily, during Korea Joa 2015 I was able to revisit it to further experience the excitement of the area. Stay tuned to read more about my Korean adventures! Lisa's Diary #1, over and out! 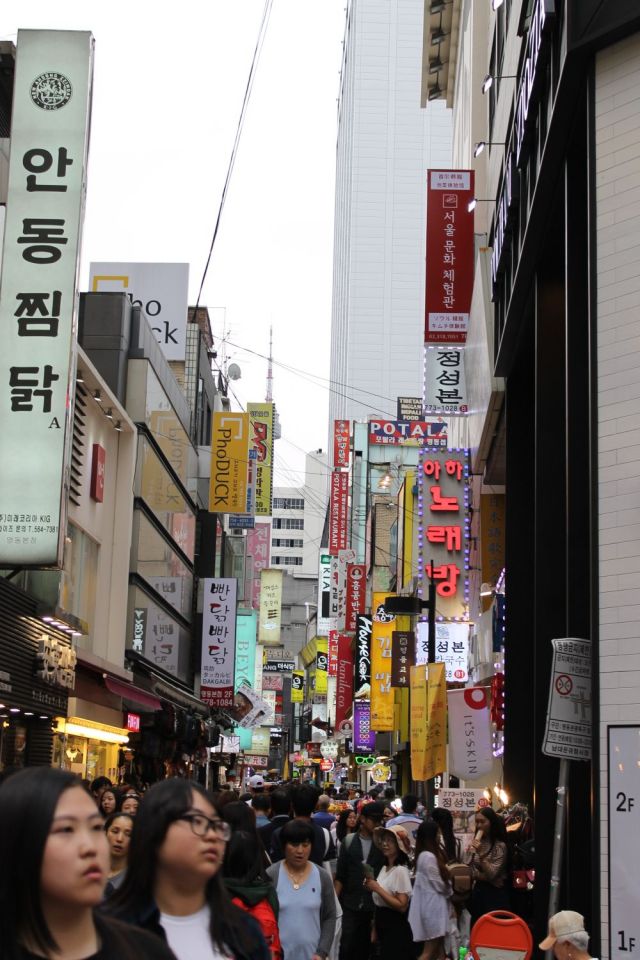 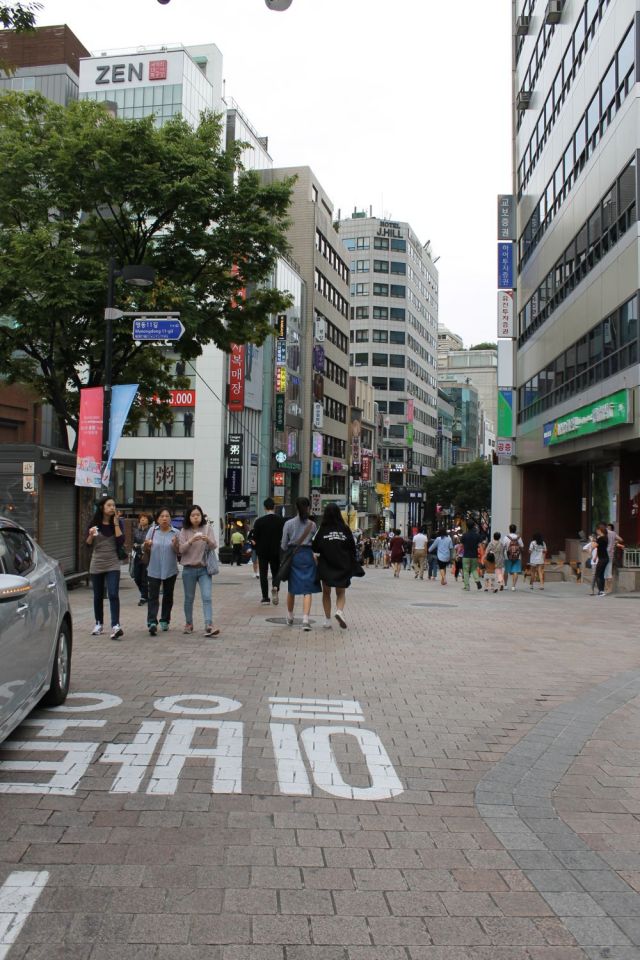 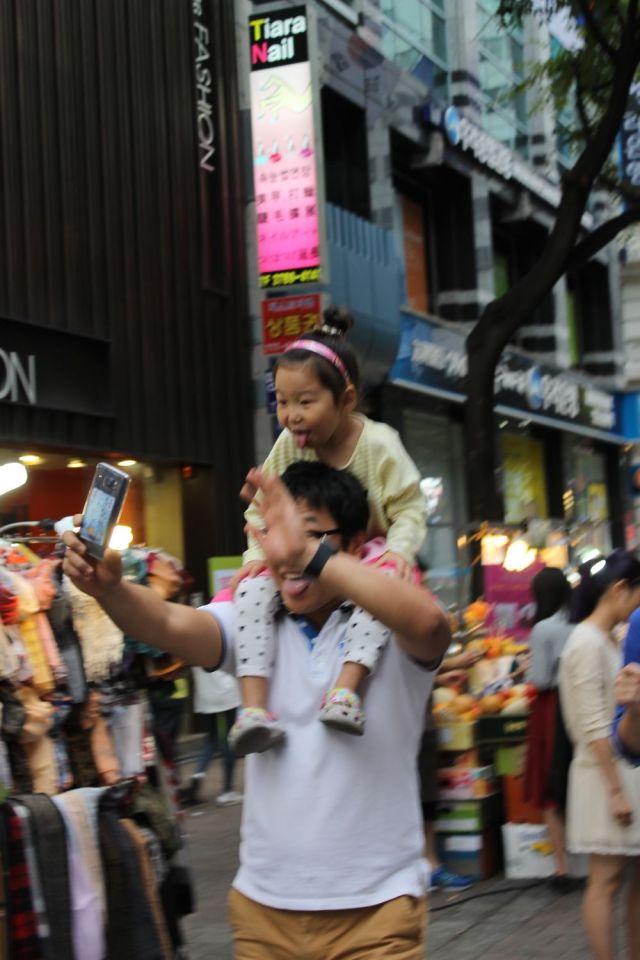 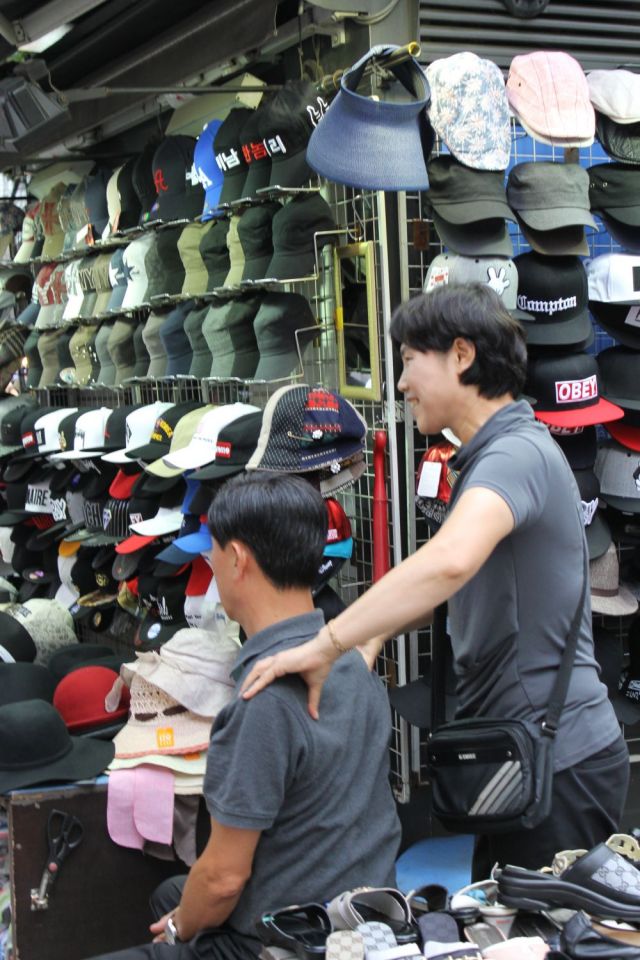