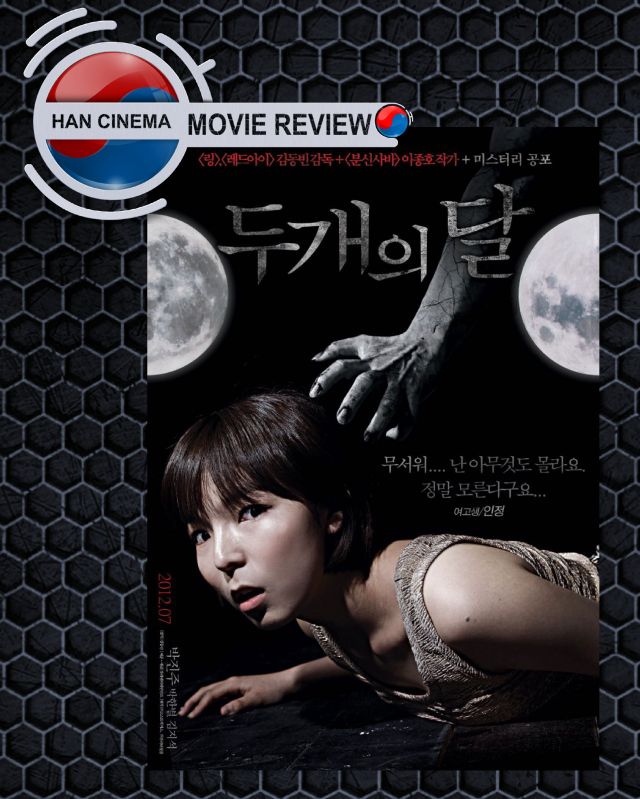 It was eight years after "Red Eye" that Kim Dong-bin decided that another stab at his own version of 'locked room' horror was in order. This time around Kim moves from a haunted train carriage to a more classic cabin in the woods setting. "Two Moons" (aka "The Sleepless") did managed to surpass Kim's previous horrific effort, which many consider to be one of the most unimpressive additions to the periodic K-horror wave. Here though he attracted more than three times as many viewers. Sadly that still only put the film on 426,574 admissions, as Kim continues to be haunted by a few dogged ghosts of his own.

Three strangers wake up in dark room in an apparently abandoned cabin, surrounded by menacing and equally unsafe woodlands. Above them the moon glares and gleams and seems to almost consume the night skies above the mysterious house. In-jeong (Park Jin-joo) is the first to awaken and finds she is lying next to two other strange bodies. Seok-ho's (Kim Ji-suk) cell phone brings their faces out of the shadows as they both attempt to make sense of where and why they are there. While In-jeong and Seok-ho are trying to make what little sense they can from the situation, a third figure emerges in the form of cool and collected So-hee (Park Han-byul). So-hee is clad in a visceral red and brings a much-needed sense of order to the terrified trio. Suspicion is past around between them and the viewers' sympathies are shifted and re-framed as new information cast shadows on their histories.

Similar to "Red Eye" (which showcased a tortured and troubling train carriage), "Two Moons" favours the tight and traumatic setting of a cut-off and curious cabin as the foundation of fear. In both films the possibility of escape seems problematic or near impossible, forcing characters to look 'within' to exorcise the begrudged spirits that plague the corners of their newly condensed world. The deviant supernatural forces in Kim's two films seemed to be chained to the site of original trauma; with the "grudge spirits" locked, and the living holding the keys to their release. In "Red Eye" a tragic accident causes the deaths of one particular carriage's passengers, but here the house stands as a disturbing memory to the bloody and calamitous disintegration of the previous homeowners.

The majority of the film's frames are, themselves, draped in darkness, with only pools and streams of coloured light left to reveal glimpses and gusts of action. As the trio stumble around the cabin waiting for the morning's true light to unburden them, the glow of moon outside acts as an unnatural accent and signifier to the uncanny void they are all trapped within. A second moon appears, rouge and menacing, and with its presence next to the 'natural' moon we are reminder of the film's opening narration: "If you see Two Moons at night, there are ghosts near you". At this point is hard not to consider the mysterious second moon and Kim's "Red Eye", a leitmotif of sorts in Kim's ghostly chronicles that bridges the void between the living and the dead-as if a greater power or omnipotent force is watching and teasing proceedings through its red glare.

Colour in the film plays an important an interested part as well. Again, like in "Red Eye", Kim defaults to anxious hues of yellow as the backdrops to events. The characters themselves are also mark by colour, but it is the instances of red throughout the film that acts as waypoints to Kim's suggestive and saturated motif. Be it by blood, coat or moon, "Two Moons" attempts to enrich the darkness with tints and tones of suggestion and thematic intent, a task that was handled adequately, but no more.

Despite some of the film's more appreciated nuances and attempts, it struggled to build any sustainable tension in its tale, in that process it found itself at times relying on other signatures of the horror genre. Those familiar with the Hitchcock's "Psycho" or the "Exorcist" series of films will have no problem separating original thought from regurgitated generic markers. Overly emphasised sound effects also crippled early scenes, making later efforts at fright and fear lack thrilling edge. Mangled bodies scratching around unnaturally ended up being more reminiscent than unnerving. Through whatever process the polish on "Two Moons" is warped by inconsistency and brash inclusions as Kim continues to fumble around in the dark, chasing his own red demons that he himself, would do well to exorcise.