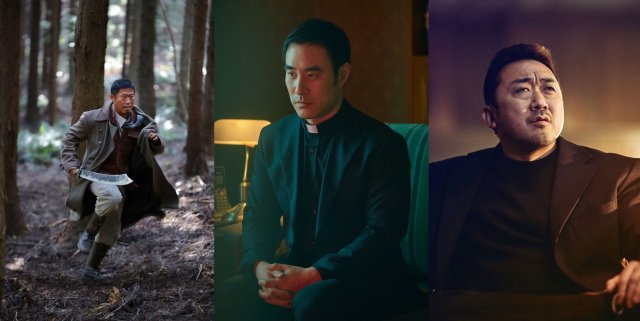 While "The Battle: Roar to Victory" has been selling itself as a war epic, the last major blockbuster of the South Korean summer season has an unlikely leading man - Yoo Hae-jin, who's pushing fifty and does not look like a movie star.

Yet he also has a surprisingly strong box office record as the leading role in movies like "Confidential Assignment" and "Luck.Key" with many more supporting roles besides. He's humble about his credit, calling"The Battle: Roar to Victory" the story of many people's triumph.

"Metamorphosis" opens on August 21st with a smaller budget but has similar casting. Bae Sung-woo plays the lead character of the movie while Sung Dong-il plays, as often seems to be the case, a dad. Of course there the appeal is less about casting and more about the supernatural story of a demon inspiring disturbing transformations. Bae Sung-woo too has been humble in regard to his role, saying that while Gang Dong-won and Ahn Sung-ki may be his betters in acting, he has the better look.

Ma Dong-seok is about the same age as Yoo Hae-jin and Bae Sung-woo, although his reputation extends internationally too, as a reknowned big tough guy. His next joint is "The Bad Guys: Reign of Chaos", which builds off of the "Bad Guys" drama. Ma Dong-seok has promised a more intense, powerful experience compared to the drama for the film, which opens in time for Korean Thanksgiving weekend. The production values, at any rate, are expected to be larger.