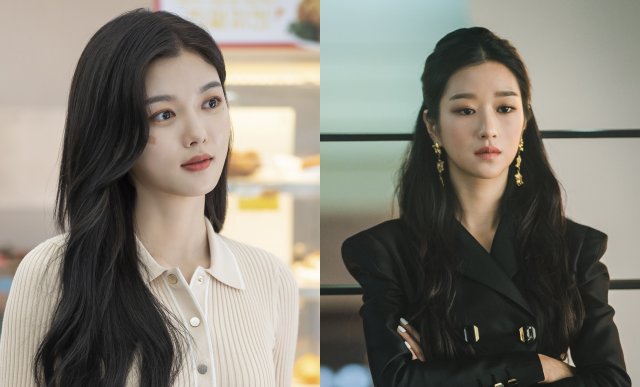 While leading men Ji Chang-wook and Kim Soo-hyun have garnered the most attention for their drama comebacks it is oddly ironic that both of their new dramas are actually centered around their leading ladies, with the major stars themselves filling the comparable role of straight men. So much of "Backstreet Rookie" is riding on Kim Yoo-jung, just as much of "It's Okay to Not Be Okay" is riding on Seo Ye-ji- albeit in very different ways.

In "Backstreet Rookie" Kim Yoo-jung plays the highly aggressive, flirty, and younger new hire of the convenience store which Ji Chang-wook manages. As a comedy, "Backstreet Rookie" relies heavily on Kim Yoo-jung's comedic timing and appeal in order for the jokes to land. There's also a strong physical element, and the young actress who has long done child roles had to go to action school to accomodate for the slapstick.

But with "It's Okay to Not Be Okay" Seo Ye-ji has an entirely different kind of performance. Described literally in the Korean title as a psychopath, Seo Ye-ji is genuinely frightening. She traumatizes her leading man in flashbacks by tearing apart butterflies. In the present day she has fantasies of plucking him off the street as a giantess for some ominous fate. Seo Ye-ji's performance is deliberately unsettling- an odd fit for a drama's that's been billed as a romance.

While not in direct competition with each other "Backstreet Rookie" and "It's Okay to Not Be Okay" are showcasing widely different styles of television drama storytelling. Yet so far, these dramas have been offbeat in very different ways, appealing to very different fans with very different interests even as the most widely billed performer for each is known for having a strong fandom.

"[HanCinema's News] "Backstreet Rookie" and "It's Okay to Not Be Okay" Contrast Radically Different Heroines"
by HanCinema is licensed under a Creative Commons Attribution-Share Alike 3.0 Unported License.