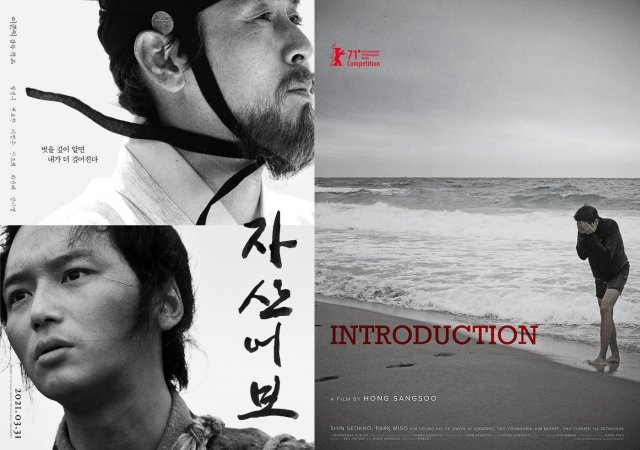 While black-and-white movies are often mistaken for less advanced versions of colored movies, they often have to be staged quite differently to maximize the contrasts of the more limited palette, allowing for striking imagery of a different sort. Bong Joon-ho has long been a fan of the genre, releasing a black-and-white version of "Parasite" last year. And now directors Lee Joon-ik and Hong Sang-soo are following that up with "The Book of Fish" and "INTRODUCTION" respectively.

In "The Book of Fish" the black-and-white camerawork is meant to emphasize the return to simplicity of the lead character, an early nineteenth century scholar who retreats from books to instead study the majesty of the ocean. Lee Joon-ik also cites the black-and-white imagery as important for detailing the scholar's world as being a very different one from what we now inhabit. These contrast with "The King and the Clown" and "Blades of Blood" which depicted very different sides of Joseon.

With "INTRODUCTION" director Hong Sang-soo has more experience with the style, having also previously made "The Day He Arrives" and "Grass" in black-and-white. In the case of "INTRODUCTION" the simplified palette is meant to evoke minimalism, rather than expression, as the lead actor stumbles through awkward familial situations. Promotional imagery also shows that "INTRODUCTION" will similarly make use of the ocean, which takes on different meaning without its usual colors.

"The Book of Fish" will be released in South Korean theaters on March 31st. "INTRODUCTION" does not yet have an announced release date. However, it has become a popular subject of discussion since winning the Silver Bear award for Best Screenplay at the Berlin International Film Festival two weeks prior.