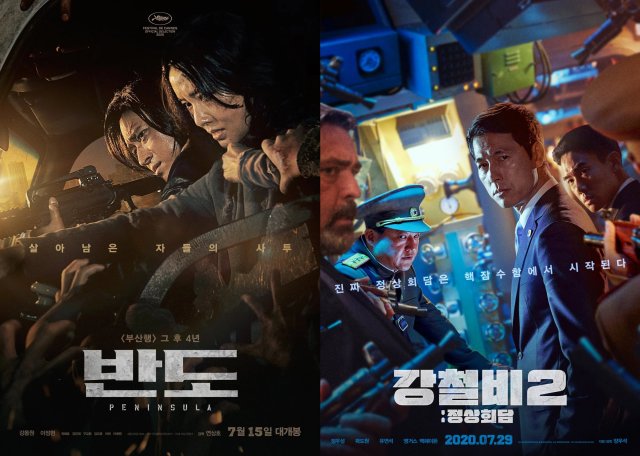 With "Steel Rain 2: Summit" passing the million viewer milestone in its first weekend and "Peninsula" passing the three million viewer milestone in that same period of time, the South Korean film industry has proven itself to be very alive in spite of the COVID-19 slowdown. Nevertheless, for such hotly hyped movies in the high movie season, these numbers are disappointing. Only the COVID-19 backdrop makes them seem impressive.

Questions remain, however, over whether the less than stellar numbers necessarily have that much to do with COVID-19 compared to the movies themselves. "Peninsula" and "Steel Rain 2: Summit" are both sequels, and as is typically the case for sequels, underperformed their precedessors "Train to Busan" and "Steel Rain". The reliability of either movie as a true tentpole is unknown, as the South Korean film market does not normally indulge in direct sequels.

Ultimately the August 5th release of "Deliver Us From Evil" will be the single biggest proving ground for the industry. The only original blockbuster of the year, it's also the first appearance of box office draw Hwang Jung-min since "The Spy Gone North" in 2018. The action movie also brings him back together with his "The New World" co-star Lee Jung-jae, with whom he had legendary chemistry.

"Deliver Us From Evil" is already competitive with "Peninsula" and "Steel Rain 2: Summit" in online reservations in spite of its release still being two days away. How long this strong early performance will persist when the movie is actually released, however, is impossible to say.

"[HanCinema's News] Blockbusters Persist But Have Yet to Excel at South Korean Box Office"
by HanCinema is licensed under a Creative Commons Attribution-Share Alike 3.0 Unported License.