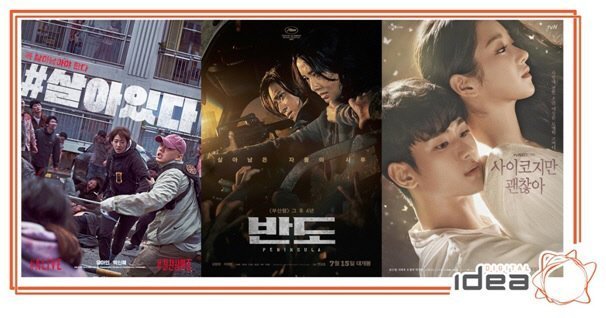 The last few weeks have been very strong for the computer graphics company Digital Idea, and going forward their profile only looks to become more important. Digital Idea recently made an impact when "It's Okay to Not Be Okay" premiered last month and immediately garnered praise for that television drama's distinctive visuals. Digital Idea also did the computer effects in "#ALIVE", the zombie flick that broke the COVID-19 induced depression at the South Korean box office last month.

But with the incoming release of "Peninsula", Digital Idea is almost certain to outdo itself. Their involvement with the zombie movie is no coincidence. Digital Idea also did the computer work for "Train to Busan", the spiritual prequel of "Peninsula" that took the world by storm in 2016. Digital Idea was also critical to allowing "#ALIVE" to get produced so quickly, simply because they had the perfect bonafides to help shepherd that project through to completion.

Digital Idea casts a long shadow over the South Korean film industry as a whole. From far-off beginnings with "The Host", they have since proceeded to work with such projects as "The Tower", "Pandora", "Exit - Movie" and "Ashfall". However, the timing of "It's Okay to Not Be Okay" is also a reminder that Digital Idea does a great deal of more subtle work in emotionally driven dramas as well. "Goblin", "Mr. Sunshine", "Memories of the Alhambra", and "Hotel Del Luna" all feature their handiwork.

And they work beyond traditional formats as well. Digital Idea also puts on exhibitions and has been working with virtual reality as well. Both home and abroad, Digital Idea has been recognized by viewers, professionals, and award-giving organizations alike for their excellent work. With "Peninsula" coming out on July 15th and already charting in online reservations sites, this month is looking to be particularly good for them.