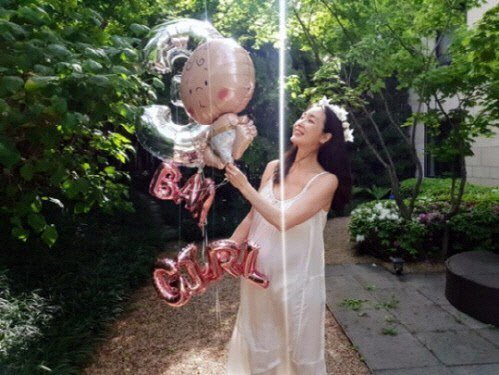 Choi Ji-woo recently surprised fans by going to the fansite dedicated to her and offering a personal announcement. In the post, a very pregnant Choi Ji-woo showed a recent photo of herself and announced that she was a month away from her expected due date and was currently resting at home.

Choi Ji-woo also stated that though she was late to having a child it was an honor to become a mother during a time when South Korea was ravaged by the coronavirus and would soon need to be rebuilt. Choi Ji-woo also stated that she liked to think of herself as an icon for older women giving birth and to offer moral support for those who may be preparing for a difficult childbirth.

Choi Ji-woo thanked fans for their positive thoughts stating that they had allowed her to make a happy household. Choi Ji-woo then asked fans to hope for brighter news after she had given birth. Fans were highly supportive of Choi Ji-woo, calling her beautiful as always and hoping for her best health.

Choi Ji-woo married a non-celebrity nine years her junior in 2018. She turned 45 in June. Choi Ji-woo last appeared in the drama "Crash Landing on You" as herself as part of a reference to one character's obsession with her old drama "Stairway to Heaven".