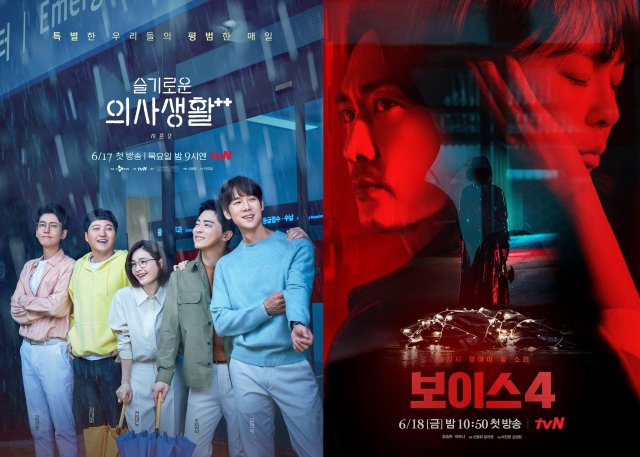 With the dual release of "Voice 4" and "Hospital Playlist Season 2" this month, CJ ENM is embracing the idea of relying on existing fandoms as a guiding principle for television dramas going forward. Their approach is hardly unique. "The Penthouse" and "Dr. Romantic" stand out as other recent, successful dramas that parlayed their original popularity into extra seasons. But where these extensions were designed with limited scope, CJ ENM may have plans for further exploitation.

For CJ ENM the idea has plenty of precedent. "Rude Miss Young-ae Season 17" was, as the titled implies, the seventeenth iteration of a drama with a history stretching back to the early aughts. But the niche comedy program was clearly stretching out its welcome, despite the core concept of a socially aggressive woman with an undesirable figure trying to compete in a man's world failing to attract much in the way of new fans.

So far at least, "Voice 4" is not performing that much better than "Rude Miss Young-ae Season 17" did with both dramas persisting at the 3% ratings range. But "Voice 4" has enjoyed much more vocal support of fans who are intrigued by the tie-ins to the original "Voice" series from 2017. This suggests a respect for the original source material and characters that allows for greater depth of support even if the breadth of support is not much improved.

"Hospital Playlist Season 2" likewise has gotten far just on the strength of the chemistry between its principal actors. The relative safety of these dramas also helps to offset the risks of CJ ENM spearheading original projects with much greater risk. Of course, seasonal approaches work best with crime dramas and social dramas- other projects, like science fiction and romances, with their need for clearer endings, can't adopt this approach as easily despite also being CJ ENM staples.