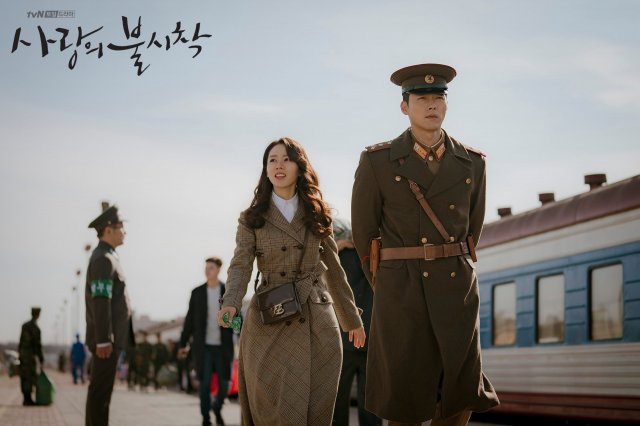 "Crash Landing on You" has been more aggressive than usual in terms of releasing making of material regarding the drama, considering that the romance has only released two episodes so far. Suspicions are mounting that the actual reason why is due to a plagiarism allegation regarding the project's similarity to a story that was serialized on Daum from 2012-2013.

The similarities between the two projects were obvious, and attention was called to them back in October. They have the exact same title and deal with similar subject matter - that of a South Korean person falling onto the wrong side of the demilitarized zone via a paragliding accident. The main superficial difference was that the protagonist in the Daum version was a ballerina, whereas the drama version is an heiress.

The broadcasting of the first two episodes has reignited the controversy. According to "Crash Landing on You" the idea for the drama actually predates the Daum story. Supposedly its main reference was an incident on September 12th of 2008 wherein a leisure boat carrying an actress accidentally floated over to the North Korean side of the demilitarized zone.

According to screenwriter Park Ji-eun, the concept changed away from boat drift to paragliding, because the former concept has also appeared in some South Korean films, most notably "The Net". Paragliding was also considered to be a stronger story element, as the leisure activity requires adherence to discipline. This allowed for a means through which the two leads could connect to one another.

"Crash Landing on You" has been careful to avoid addressing the controversy directly. Doing so could constitute a willingness to acknowledge that the similarities are strong enough to be actionable. At present, author Ji Mang-aeng of the Daum work does not appear interested in legal action, having only remarked on the curiousity of the similarities without personally accusing "Crash Landing on You" of plagiarism.

Privately, professionals in the drama production industry have been divided on the topic. Some that there is nothing new under the sun with others stating similarities between the characters are too strong to be considered a coincidence. "Crash Landing on You" is currently airing on tvN on Saturday and Sunday nights.