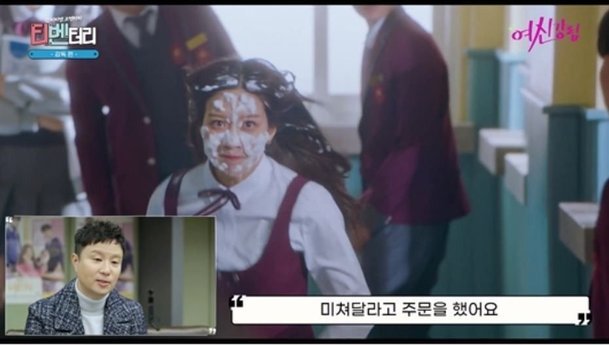 On December 14th tvN released a video of various scenes from "True Beauty" with director Kim Sang-yeob providing commentary. The discussion mainly gets into various visually distinctive scenes that do not have equivalent in the original webtoon.

One such scene discussed is an intercut staircase shot that features the lead actors, played by Moon Ga-young and Cha Eun-woo, intercut on different parts of the oddly lit staircase with the actress struggling to maintain balance without glasses. Though "True Beauty" predates the COVID-19 pandemic, Kim Sang-yeob explained that the construction and motivation behind the scene had much to do with issues relevant to the disease.

Kim Sang-yeob also discussed the distinctive entry of Hwang In-yeop's character. In the original webtoon this character is introduced relatively late compared to the other two leads in spite of his obvious importance. But in the drama he is seen wearing a motorcycle and being a party to generally more dramatic scenes in his initial encounters with the story's heroine.

In terms of performances Kim Sang-yeob stated that he decided to emphasize teenage anxiety and melodrama to better allow the actors to emote with one another. Such elements also appeared in the webtoon, but were largely depicted internally. Consequently in order to make a broader impact Kim Sang-yeob relied more heavily on visual clichés that were similar to the constructions in the original webtoon but which could be more dynamically filmed.