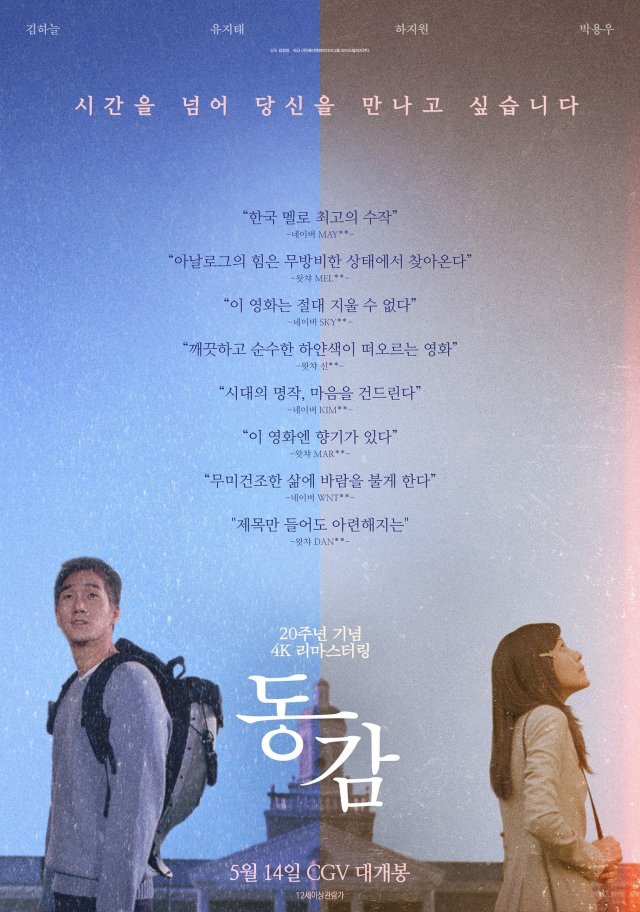 "Ditto" is one of the major films of the Korean New Wave from twenty years ago, starring Kim Ha-neul and Yoo Ji-tae as college students communicating through yet separated by a barrier of time and space. The 4k remastering of "Ditto" has been confirmed for a May 14th release in South Korean theaters to commemorate its twentieth anniversary, and the marketing features a new modern style poster to go with it.

As is the case with most remasterings, the theatrical release is mainly just a means to promote the new version when it inevitably starts being sold on digital platforms. But marketing for "Ditto" has been unusually aggressive, in part because the COVID-19 epidemic has radically altered the theatrical marketplace, with many major releases being pushed back. Even independent films have been charting at movie theaters lately, mostly because the overall box office figures are so poor.

But "Ditto" may yet still hold resonance for a new generation as a snapshot into the past one. Indeed, much of the movie's plot takes place not just twenty years ago, but forty years ago, with a nostalgic rendering of South Korea through a different generation's eyes. Although that generation, too, has now slipped beyond current trends. The online commenters featured in the new poster, at any rate, appear to consider "Ditto" a timeless classic.

"[HanCinema's News] "Ditto" to Be Rereleased in South Korean Theaters With a 4k Remaster"
by HanCinema is licensed under a Creative Commons Attribution-Share Alike 3.0 Unported License.