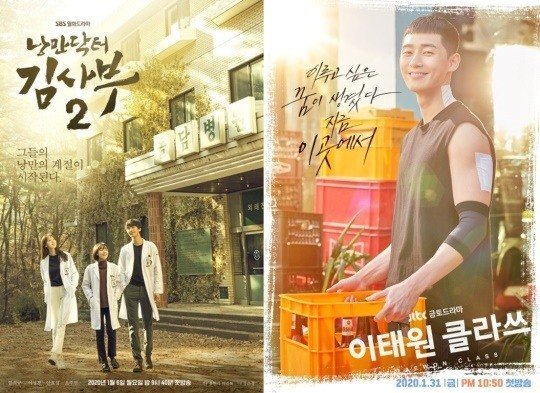 Following a holiday break prompted by the conclusion of the popular drama "VIP" last year, the latest season of dramas is set to begin in earnest when "Dr. Romantic 2" premieres on January 6th. The follow-up to the popular 2016 drama "Dr. Romantic" comes in with high expectations.

Next up on January 15th is "Money Game" on tvN, which follows after the conclusion of "Psychopath Diary" on tvN. "Money Game" will mark a break from tvN's ambivalent high concept strategy that was pursued throughout much of 2019. The financially themed drama will deal with the finance industry and major international economic plans.

January 22nd will feature the start of "The Game: Towards Zero", which premieres on MBC following the end of "Love With Flaws" this month. The supernatural crime drama will center around a man played by Ok Taecyeon who sees people right before their untimely deaths. Lee Yeon-hee will also feature as the detective with whom he works.

Last but not least is "Itaewon Class", which will close January out on the 31st following the conclusion of "Chocolate" on jTBC. The highly anticipated drama stars Park Seo-joon as a restauranteur who works to open his own restaurant in the Itaewon district of Seoul - a region that is notorious for strong competition in international cuisine.