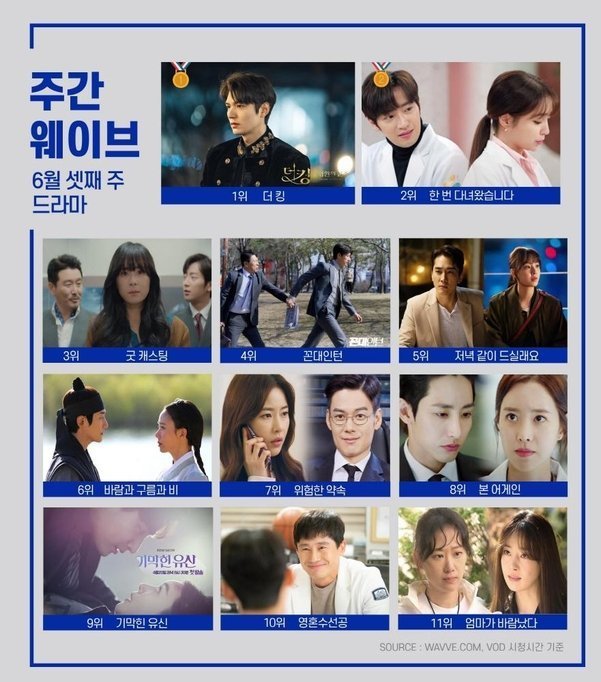 In the recent rankings for the domestic South Korean streaming service Wavve, "The King: Eternal Monarch" topped all other performers in the third week of June. The news comes as little surprise, as "The King: Eternal Monarch" had just aired its final episode on June 12th. Though the drama underperformed expectations it was the only drama to specifically target a younger audience more likely to use Wavve.

Second place went to "Once Again", another drama from Studio Dragon that has shown surprisingly broad appeal despite its airing in a low prestige early evening weekend timeslot. "Good Casting" was third place at the end of its strong run as well. Fourth, and fifth place went to "Kkondae Intern" and "Dinner Mate", which have performed relatively modestly in terrestrial ratings.

"King Maker: The Change in Destiny", "Fatal Promise", and "Born Again" were in ranks six through eight, each either currently airing or having recently finished their run. The same is also true for "Brilliant Heritage", "Fix You", and "Mom Has an Affair", the lower ranks in general more dominated by daily dramas.

"[HanCinema's News] Drama Rankings for Wavve in the Third Week of June Unveiled"
by HanCinema is licensed under a Creative Commons Attribution-Share Alike 3.0 Unported License.