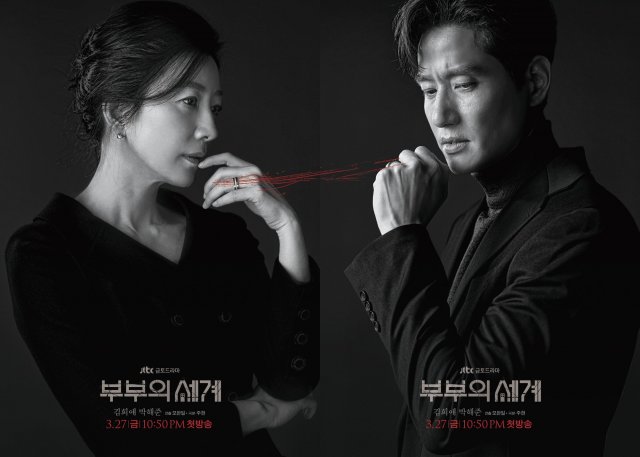 Promotion for "The World of the Married" has kicked into high gear, as the upcoming jTBC drama hopes to take advantage of the strong lead-in offered by its soon to be completed predecessor "Itaewon Class". The latest posters from the drama have an ominous theme, even as they used red string imagery.

The red string of fate is an idea from East Asian mythology that a person is bound to their true love by an invisible red string. The use of such imagery in "The World of the Married" is surprising, as the titular couple played by Kim Hee-ae and Park Hae-joon engage in bitterly vengeful reprisals against each other.

"The World of the Married" comes from director Mo Wan-il, who directed the similarly themed "Misty" back in 2018. Kim Hee-ae has expressed strong admiration for his directing style, which includes much detail and sensation. Park Hae-joon also had praise for the director's ability to communicate a great deal in a single shot, as well as the relative freedom he allows to his actors when it comes to developing their characters.

"The World of the Married" will premiere on March 27th. It will air on Fridays and Saturdays ten minutes after the current airdate of "Itaewon Class" at eleven in the evening.

"[HanCinema's News] Dual Red String Themed Posters Released for "The World of the Married""
by HanCinema is licensed under a Creative Commons Attribution-Share Alike 3.0 Unported License.