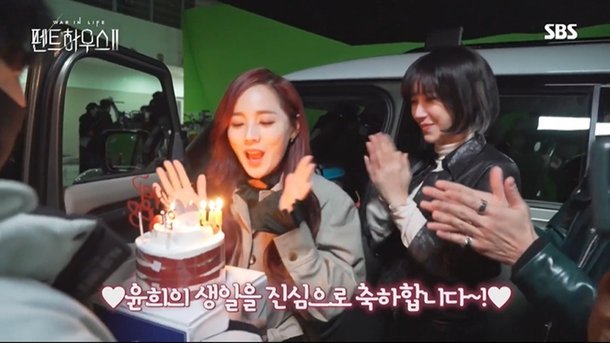 On March 23rd "The Penthouse 2" released behind the scenes footage for the drama, not all of which pertained to scripted scenes. In one noteworthy instance, a video showed cast and crew presenting Eugene with a birthday cake as they all clapped and smiled and sang. Lee Ji-ah and Park Eun-seok are also visible in the footage. This moment dates the behind the scenes stills released on March 23rd to March 3rd, as Eugene turned forty years old on that day.

"The Penthouse" has represented a major comeback for Eugene as it is her first major drama role since "All About My Mom" in 2015. The break coincides with the birth of Eugene's two daughters with her husband Ki Tae-young. "The Penthouse 2" is an ensemble drama of which Eugene's role is only one of many. "The Penthouse 2" airs on Fridays and Saturdays on SBS, and has already been confirmed for another season, "The Penthouse 3" with an as yet undeclared airing date.

"[HanCinema's News] Eugene Enjoys Surprise Birthday Cake on the Set of "The Penthouse 2""
by HanCinema is licensed under a Creative Commons Attribution-Share Alike 3.0 Unported License.