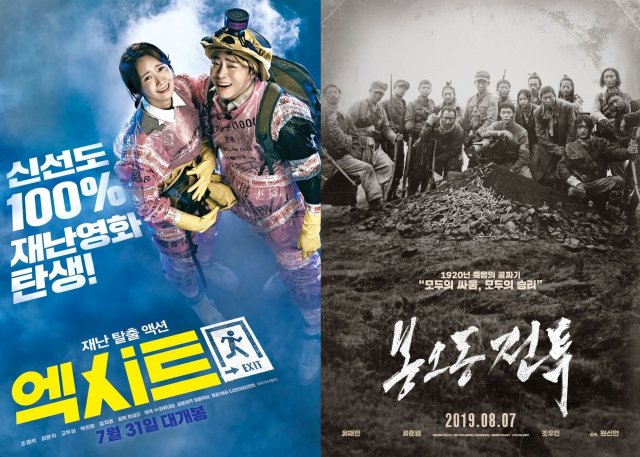 The highly anticipated match up between "Exit - Movie" and "The Battle: Roar to Victory" took place last weekend. "Exit - Movie" just barely edged out a win with a margin of under fifty thousand tickets. The disaster flick's cumulative total closed Sunday out at 5,785,252 admissions. The movie is almost certain to break the six million mark.

While "The Battle: Roar to Victory" did well in its opening weekend bringing in 1,404,753 admissions, topping out at over two million, it was still an underperformance for the war movie. Contemporary anti-Japanese sentiment that may have bolstered the movie's performance was canceled out by the revelation that the film crew had needlessly damaged endangered plants during shooting. Claims of environmental restitution on the part of the production company did not damper criticism.

"Bring the Soul: The Movie" and "The Divine Fury" had modest weekends, grossing about one hundred thousand viewers each. "Red Shoes and the Seven Dwarfs" continues to edge toward seven hundred thousand viewers, and the comfort woman documentary "My name is KIM Bok-dong" handily outperformed "Carrie TV Love Concert: The Movie" for a tenth place spot on the overall list in their mututally shared opening weekend.