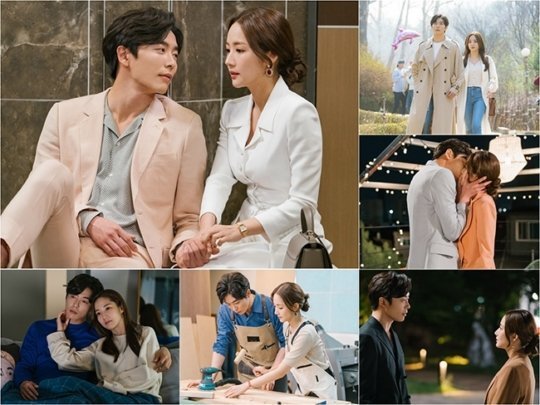 The top slots in the Good Data report are unchanged from last week. That means for the third week in a row, "Her Private Life" has been the most popularly trending drama on South Korean social media. Kim Jae-wook and Park Min-young similarly maintain pole position as the most popular actors currently headlining an evening drama.

Particular attention has been noted in terms of their visual style, particularly in terms of color schemes in the outfits of the leads. This has probably allowed "Her Private Life" to excel in social media metrics while having relatively weak ratings, as still shots of the drama look extremely good even outside of context.

Baby blue, baby pink, and white pastels have also been appropriate for the new spring season. The various suits which Kim Jae-wook and Park Min-young wear also give a strong semi-formal office couple look to the lead characters. The colors are also well-matched to tone, with simpler black-and-white sets being used to avoid detracting too much from dramatic scenes or big kissing setpieces.

Park Min-young's stylist has explained that much work has gone into effectively maintaining this style. The style teams take a close look at the script to identify properly dramatic moments, and also make sure to blend color choices in with background seasonal elements. Another critical hard-to-see element is that they make sure the actors are wearing comfortable clothes during kissing scenes, to avoid distracting them.

Kim Jae-wook's stylist has also described a shooting environment of much deliberation, noting that they are focused not just on "Her Private Life" in the immediate sense, but Kim Jae-wook's image in general. They see his role in "Her Private Life" as being a different kind of romance than what he's done before, and one necessitating specific artistic ideas. Although even then, Kim Jae-wook and Park Min-young are still a couple, and must complement each other.