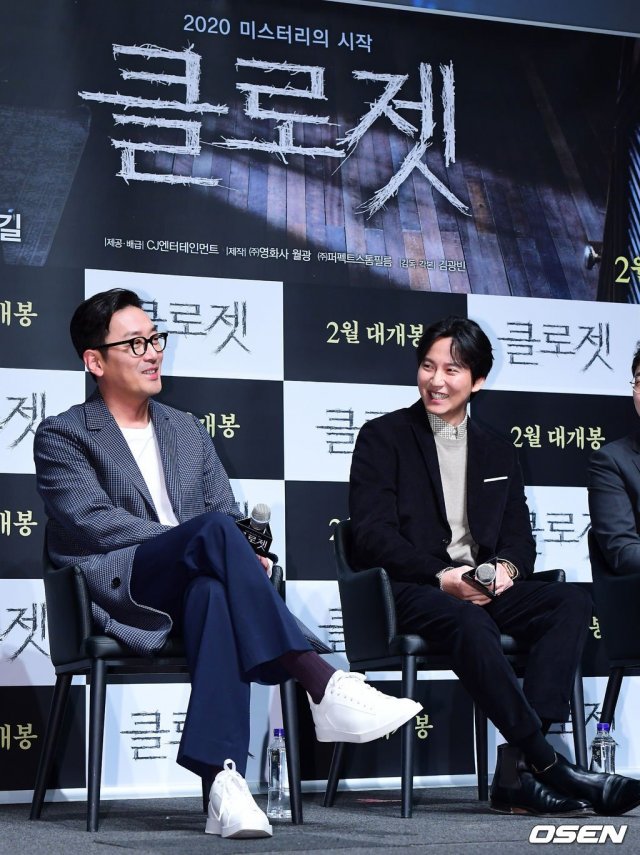 On January 2nd Ha Jung-woo and Kim Nam-gil appeared at a press conference held for the upcoming February horror film "The Closet". The event at the Apgujeong CGV in the Gangnam district of Seoul featured both actors emphasizing how they wanted to try working in a kind of genre film they hadn't done before.

The status of "The Closet" as a genre film has made the casting of Ha Jung-woo and Kim Nam-gil noteworthy. Their interest in "The Closet" was also a major surprise to writer/director Kim Kwang-bin in his debut film. Kim Kwang-bin said that he had to keep their involvement a secret from friends and family. Ha Jung-woo got involved with "The Closet" because he met Kim Kwang-bin while making "The Unforgiven" and had a good impression of the movie's sound supervisor.

Ha Jung-woo, for his part, was intrigued by the premise of a supernatural thriller where two very different kinds of men had to work together to unravel a mystery. Ha Jung-woo described the premise as being relatively unique. Ha Jung-woo also went into the research he did, talking to parents to understand the feelings at play for a man who had lost his daughter. He described the playing scenes as being the most difficult, saying that they required so many takes he had trouble breathing.

Kim Nam-gil liked his character for being a generally mysterious person that is very much at odds with his established brand. Kim Nam-gil also enjoyed how his character changed owing to his chemistry with Ha Jung-woo. This chemistry has become a major point of curiousity for the project, as Ha Jung-woo and Kim Nam-gil have never appeared in the same project before. "The Closet" is set to release in South Korean theaters sometime in February.

"[HanCinema's News] Ha Jung-woo and Kim Nam-gil Talk About "The Closet""
by HanCinema is licensed under a Creative Commons Attribution-Share Alike 3.0 Unported License.