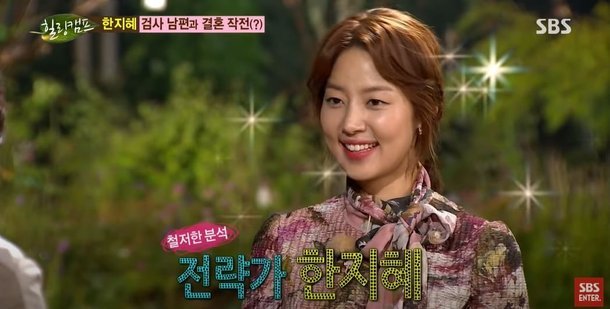 The reappearance of Han Ji-hye into public life with the currently airing variety show 'Stars' Top Recipe at Fun-Staurant' has once again brought the actress into focus, with many wondering about the past of the once famous actress, and particularly her marriage. So it is that an old episode the SBS variety show 'Healing Camp' has come into focus which features Han Ji-hye frankly discussing her personal life.

Han Ji-hye married a public prosecutor six years her senior back in 2010, when Han Ji-hye was twenty-six years old. Han Ji-hye was asked if she had experienced much discomfort due to this decision and Han Ji-hye responded in the affirmative. She expected that getting married would negatively impact her career. However, Han Ji-hye also stated that she felt what mattered most was what was on the inside. Han Ji-hye said she wanted to marry her husband fast because she didn't want to lose him.

The two of them met in church and got to know each other through their shared hobby of hiking. After "The Legendary Witch" in 2014, Han Ji-hye took an extended break from work in order to live with her husband overseas, though she still maintained an agency profile. The two now live on Jeju Island, and are childless. Han Ji-hye has no currently scheduled drama projects, her last one being "Golden Garden" from 2019.