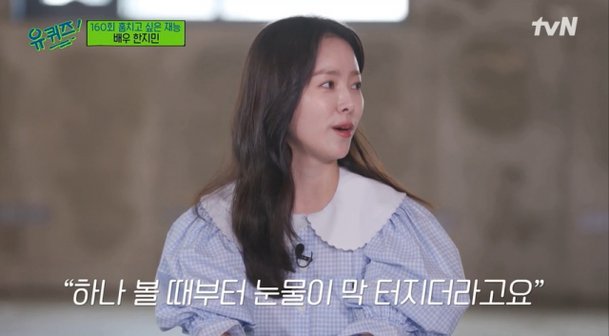 In the most recent episode of the variety show You Quiz On the Block, number 160 in the overall order, actress Han Ji-min made an appearance, discussing among other things her role in "Our Blues" as a rookie Jeju diving woman. Comedians Yoo Jae-suk and Jo Se-ho acted as the emcees, with the theme being skills worth stealing. Han Ji-min said that in her debut in "All In" back in 2003, she had no idea how to act, and marveled at how hard they worked and struggled so.

It was with "Dae Jang Geum" in 2007 that Han Ji-min first had her chance to see serious older actors up close. At that time, Han Ji-min began to learn serious proper acting. But the most emotional moment for Han Ji-min in "Our Blues" was not any of her own, but rather that of the sister of her charactered, who was played Jeong Eun-hye. Han Ji-min claimed that even before the camera was set she started crying, thinking of how Jeong Eun-hye herself lived a life not too different from her character.

Thinking about how a person who struggles to face people could manage to paint portraits of forty thousand of them thus overwhelmed Han Ji-min. Apparently, this was also Han Ji-min's last scene to film at all, so she was also left thinking throughout that time about the entire production to date, wondering how Jeong Eun-hye could adjust to the filming process as a disabled person. Han Ji-min credited the love of all the cast and crew to the drama being able to end so splendidly.