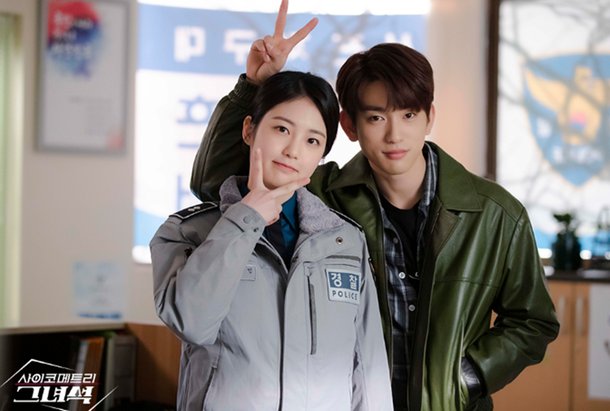 As "He Is Psychometric" enters its final stretch, more attention is being paid to earlier episodes to see about the drama's recurring themes. Director Kim Byeong-soo had made a point before the drama even began of the importance of metaphors and deduction.

One such example is of how Seong-mo (Kim Kwon) saves Lee Ahn (Jinyoung) early on in the story. The scene takes place in black-and-white and is, for Seong-mo, also a representation of how his view of the world changes throughout the drama.

Director Kim Byeong-soo also notes a scene in the third episode, where Lee Ahn is trying to find Jae-in (Shin Ye-eun). The way painting on the rooftop plays into the scene both plays into the dexterity of their fingers, and how Lee Ahn and Jae-in become intertwined with each other, but also the generally unimaginable state of the future. This sets up the odd circumstances of their meeting again in the future.

In addition to its storytelling "He Is Psychometric" has also gotten interest for the chemistry of its leads. Pictured above are the lead actors Jinyoung and Shin Ye-eun in a cute moment while filming.

"[HanCinema's News] "He Is Psychometric" Director's Commentary"
by HanCinema is licensed under a Creative Commons Attribution-Share Alike 3.0 Unported License.