On March 5th, tvN broadcasted a preview episode of "He Is Psychometric". The purpose of the preview episode was to make an overview of the plot and characters and stoke viewer interest.

In this episode narration provided by young Seong-mo (played by Jo Byeong-gyu) establishes the background. Then, the principle actors themselves appear to introduce their characters.

Lee Ahn (played by Jinyoung) is the unfortunate lead character with psychometric powers. Jae-in (played by Shin Ye-eun) is the police officer who hides his secret. The now adult Seong-no (played by Kim Kwon) isn't fooled by the trickery. There's also Ji-soo (played by Kim Dasom) who acts as a sort of girl crush investigator.

The special emphasized the high synchronization rate between the actors. Emphasis was also placed on how Jinyoung as Lee Ahn quickly transitions from being cute to being the focus of intense action scenes.

In this way the tone is spotlighted as being quite diverse. On one end "He Is Psychometric" comes off as a romantic thriller, but by the by it transforms into a visual party as Lee Ahn's ability and the special effects take focus.

The special has also given a clearer picture of the plot. Everything stems from events that happened eleven years before the drama is principally set. Given how the young version of Seong-mo is who's providing the voiceover, it would seem that "He Is Psychometric" is planning on spending at least a little time with younger versions of the cast.

"He Is Psychometric" starts on March 11th and will air at 9:30 in the Monday/Tuesday timeslot on tvN. Sixteen episodes are planned. 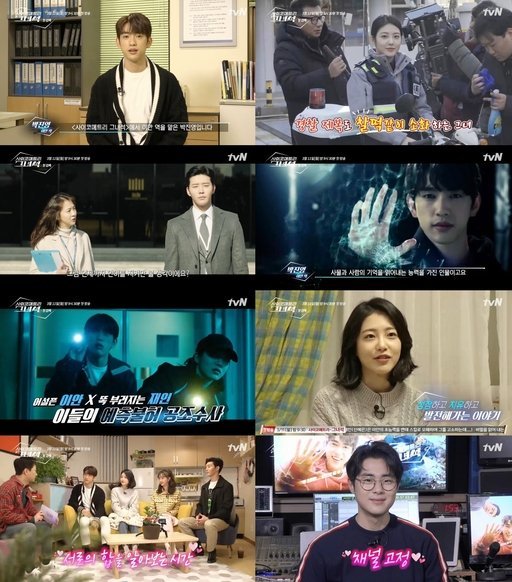 "[HanCinema's News] "He Is Psychometric" Preview Airs"
by HanCinema is licensed under a Creative Commons Attribution-Share Alike 3.0 Unported License.