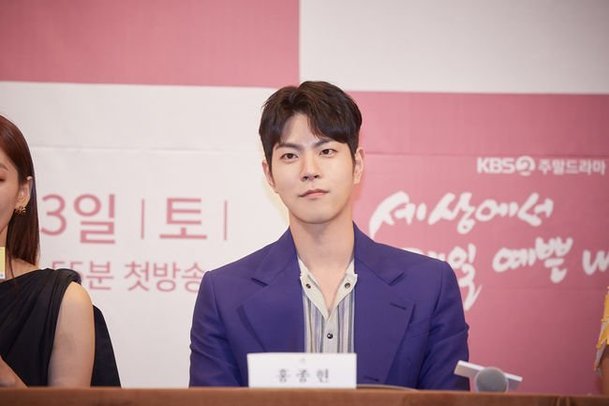 In an interview on September 24th actor Hong Jong-hyun confirmed that he keeps contact with his co-stars from the 2017 historical drama "The King Loves", Im Si-wan and Yoona. In the drama the three actors formed a love triangle, where Hong Jong-hyun and Im Si-wan played members of the Goryeo royal family while Yoona was the daughter of a family stuck in political conflict with them.

While the drama had a mixed reception Hong Jong-hyun described the shooting experience as a pleasant one, stating that he got along well with his co-stars. He had strong praise for their character as well. Hong Jong-hyun mentioned speaking with Im Si-wan as he was preparing to enter mandatory military service and noting that Im Si-wan maintained a good spirit and attitude both before and after his interview.

Hong Jong-hyun described Yoona as being too busy lately for him to see as much of her as he'd like, but described them as being on friendly joking terms. Hong Jong-hyun also said that Yoona asked for his advice when it comes to long term daily dramas.

Hong Jong-hyun also described himself as being on friendly terms with Oh Min-suk, and said that he was present when Oh Min-suk took a seat in preparation for his role in the upcoming "Beautiful Love, Wonderful Life". Hong Jong-hyun described the moment as feeling like a baton pass, as he himself had sat in that chair for "Mother of Mine".

"[HanCinema's News] Hong Jong-hyun Stills Keeps in Touch With his Co-stars From "The King Loves""
by HanCinema is licensed under a Creative Commons Attribution-Share Alike 3.0 Unported License.