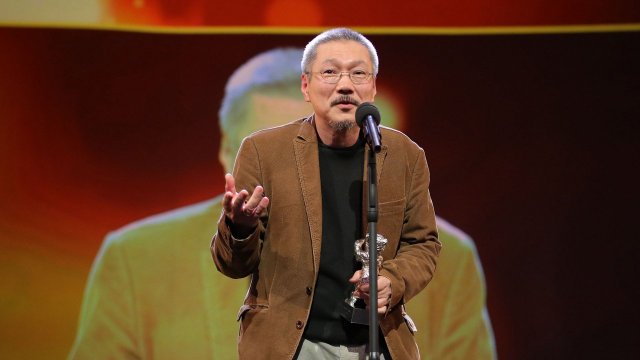 Famed writer/director Hong Sang-soo has long been on a career downswing. His films, once mainstays of the South Korean independent film market, had been earning a lukewarm box office reception in recent years compared to newer, fresher talent. So it was with some surprise that Hong Sang-soo earned the Silver Bear at the Berlin International Film Festival for "The Woman Who Ran" a few days back, cementing his international reputation.

Hong Sang-soo is no stranger to the international film festival circuit. His very first movie, "The Day a Pig Fell into the Well", received awards at international film festivals and helped usher in the Korean Wave. In his acceptance speech Hong Sang-soo expressed humility, describing his fondness for movies on a smaller scale and encouraging the crowd to thank his actresses for their work on the project.

One of these actresses, Kim Min-hee, is at the center of the controversy that has damaged Hong Sang-soo's reputation. The romantic relationship between the two of them has been poorly received, as Hong Sang-soo is still married to his wife, who has been unwilling to grant him a divorce. Hong Sang-soo's philandering ways are not in themselves news, as his movies often depict pathetic adulterers who seem like obvious stand-ins for Hong Sang-soo himself.

Ironically, Hong Sang-soo's films have typically been phrased for effectively taking the female perspective into account regarding such relationships, typically in a nuanced and sympathetic way. Kim Min-hee has now appeared in the leading role in Hong Sang-soo's last seven films, starting with "Right Now, Wrong Then" and excepting "Yourself and Yours".

Kim Min-hee now exclusively appears in Hong Sang-soo films, though she received a major popularity boost thanks to her starring role in "The Handmaiden" back in 2015. South Korean film critics have argued that Kim Min-hee has grown quite a bit as an actress through Hong Sang-soo's films, and have remained supportive of the artistic merit of Hong Sang-soo's current work. They cite his decrease in popularity as being unrelated to the quality of his films.

Whatever the reason for the decrease, "The Woman Who Ran" has not yet been given a domestic release date. The hype from Hong Sang-soo's Silver Bear win may allow the film to find a distributor, though as of yet none is forthcoming.