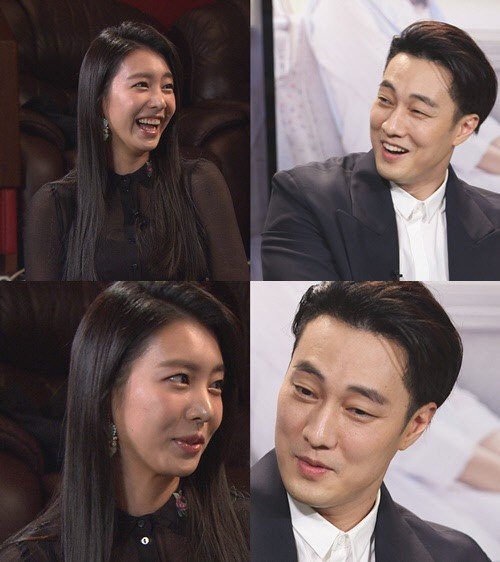 On May 21st the SBS Entertainment News program 'One Night' released behind the scenes footage of the first known meeting between So Ji-sub and Jo Eun-jung. They met at the time for work reasons - Jo Eun-jung was interviewing So Ji-sub and Son Ye-jin for their then-upcoming movie "Be with You".

In the footage there are moments where So Ji-sub seems oddly nervous, even though as a veteran actor he should be very comfortable with these kinds of interviews. Son Ye-jin's presence in the interview make this especially obvious, as there are times when she and Jo Eun-jung team up to tease So Ji-sub for his odd answers.

One particular standout moment is when Jo Eun-jung comments on how So Ji-sub seems like a very expressive lover. So Ji-sub responds by saying that he works hard to clean up his past when it comes to love. At that time So Ji-sub had never had a confirmed girlfriend. And with the current announcement that he is together with Jo Eun-jung, there is speculation that the two might be planning to get married.

"[HanCinema's News] How So Ji-sub and Jo Eun-jung First Met"
by HanCinema is licensed under a Creative Commons Attribution-Share Alike 3.0 Unported License.