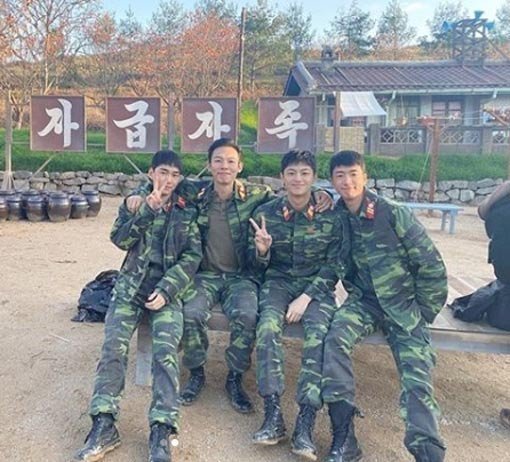 While Hyun Bin is the obvious male headliner for "Crash Landing on You", many of the drama's other actors have also brought out surprising interest from viewers. These side characters, North Korean soldiers in the internal continuity, have had excellent chemistry both with each other, as well as with the proper leads.

Their distinct personalities are part of what sets them apart. Yang Kyung-won, for example, is a huge talker who obsessively talks about catching a tiger, though he has had little success to date. Yang Kyung-won's chemistry with lead actress Son Ye-jin has been great, as their screentime has a strong cat-and-mouse element. Yang Kyung-won has until now worked mostly in stage performances, having debuted in "Arthdal Chronicles" earlier this year in a similarly minor role.

The younger squad members, played by Lee Shin-young, Yoo Su-bin, and Tang Joon-sang, have aroused much interest in viewers for being handsome. The casting call for "Crash Landing on You" specifically tried to avoid casting actors who look too North Korean. This reflects modern trends, wherein some Internet personalities have surprised fans by revealing that they are North Korean defectors, a fact they are often loathe to disclose because they don't consider it that important.

"Crash Landing on You" has had much success, in part by not hewing too close to political stereotypes of North Koreans. The romance has definite elements of culture shock, but for the most part its North Korean characters are portrayed sympathetically and humanly. This goes beyond just Hyun Bin in the leading role, and applies to lesser cast members as well.