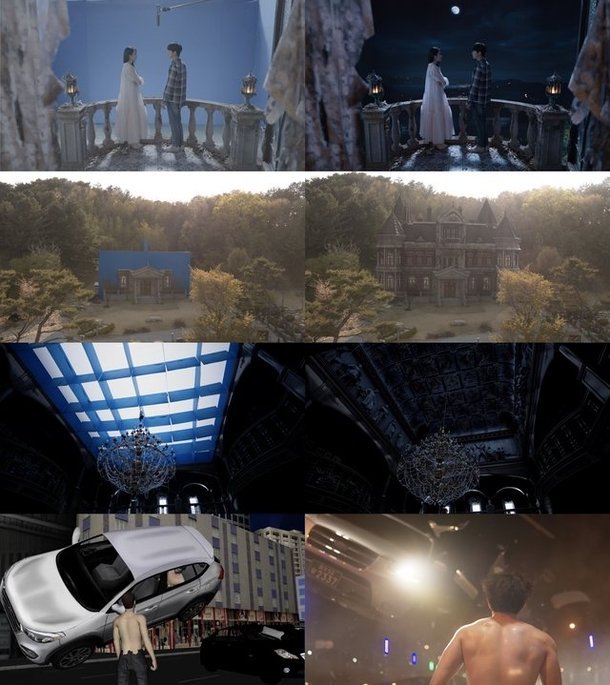 Recent comparative stills released by tvN have helped shed some light on the mystery of how exactly "It's Okay to Not Be Okay" is being filmed. The drama has won much interest and acclaim for its unique visual style. Many have wondered if even the more mundane effects, like shots of a mansion in the countryside, were real places or just computer images.

The answer is a bit of both. For the mansion at least, the countryside is real but the mansion is largely simulated, with only the part needing to be seen in close-up shots actually physically present. Similar patterns appear in the drama's other noteworthy visuals. A balcony, for example, is real alongside its shadows, with the backdrop being added in digitally. A real chandelier is used for a gothic interior even if other less central details are only inserted post-production.

In more dangerous pieces, such as a scene involving a crashing car, computer modeling is used to establish all the fundamentals of the scene with everything after that point needing to be manually altered. Over twenty artists working over a period of two months were necessary in order to get that scene just right. This is part of why the hybrid approach is emphasized. In addition to looking nice, hybrid scenes also tend to be much cheaper to film.

But far beyond penny-pinching creative design is the main point being emphasized in these decisions. The VFX director for "It's Okay to Not Be Okay" has spoken highly of director Park Shin-woo, describing him as an inquisitive visual designer with many excellent ideas for how to combine location shooting with computer imaging software to create something uniquely stylish.

"[HanCinema's News] "It's Okay to Not Be Okay" Blurs Boundaries Between Practical and Computer Effects"
by HanCinema is licensed under a Creative Commons Attribution-Share Alike 3.0 Unported License.