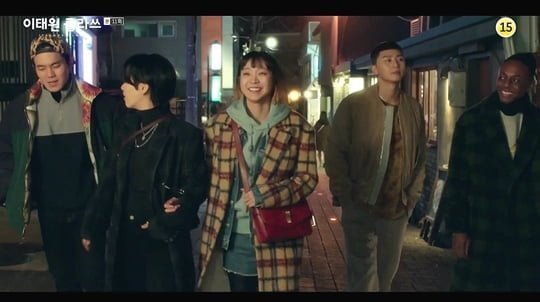 "Itaewon Class" held steady in its most recent week of ratings, holding with 13.4%. Part of the drama's popularity is tied with its distinct fashion decisions. Because "Itaewon Class" takes place in, as the title implies, the Itaewon district of Seoul, its characters dress in a fairly noteworthy way compared to other major dramas as of late.

Kim Da-mi has been an obvious signifier of this, with clothes that look good, but which are also clearly intended to be used in casual work. Her striped coat that is pictured here contrasts well with Kim Da-mi's denim-laden interior, and also pairs nicely with her ruby colored handbag. The other pictured characters also have nice color mixes in their wardrobe that also contrast well with their complexion.

"Itaewon Class" is currently airing on Friday and Saturday nights on jTBC. It stars Park Seo-joon and Kim Da-mi in the leading roles as aspiring restauranteurs and is based on the webtoon of the same title. It just aired its twelfth episode of a planned sixteen.