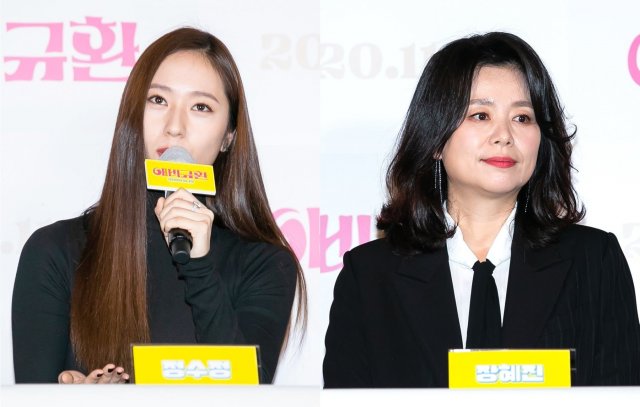 A recent broadcast of the SBS Radio program 'Cultwo Show' featured Jang Hye-jin and Krystal talking about their upcoming film "More Than Family". In the movie, Krystal takes on the role of a young woman who finds herself accidentally pregnant and decides to search out her birth father. Jang Hye-jin plays the role of her mother.

Jang Hye-jin said she was impressed with the work Krystal did on "More Than Family" stating that she did not think herself to have been capable of such a performance at the age Krystal is right now. Jang Hye-jin confessed that based on her public image she thought Krystal would be snootier but on set and in person she actually had a lovely personality. Jang Hye-jin was surprised that Krystal actually had acting talent and wasn't just hired for marketing reasons.

For her part Krystal also had praise for Jang Hye-jin, although it was more straightforward. Krystal said that she first saw Jang Hye-jin in "Parasite" and was impressed with both her appearance and her energy. According to Krystal the two become close quickly, with Jang Hye-jin simultaneously holding the role of an older sister, a mother, and a respected colleague over the course of the production of "More Than Family".

Jang Hye-jin told other stories about her career. She mentioned a scene in "Parasite" that put her in physical danger, for which many safety mechanisms had been put in place. However, as Jang Hye-jin was running lower than previously discussed, director Bong Joon-ho mistook her acting for a serious injury and ordered the scene cut, with other staff members preparing to take her to the emergency room. Jang Hye-jin was unhurt, but noted that even on set, the violent scenes looked quite realistic.

Jang Hye-jin also mentioned downtime with Hyun Bin on the set of "Crash Landing on You" noting that the star has a great way of making conversations feel one on one. Purportedly he would often call her his older sister, and ask if she'd been eating well. "More Than Family" will be released on November 12th in theaters. This follows a successful premiere at the Busan International Film Festival last month which primed the movie for wider distribution.

"[HanCinema's News] Jang Hye-jin and Krystal Talk About "More Than Family""
by HanCinema is licensed under a Creative Commons Attribution-Share Alike 3.0 Unported License.