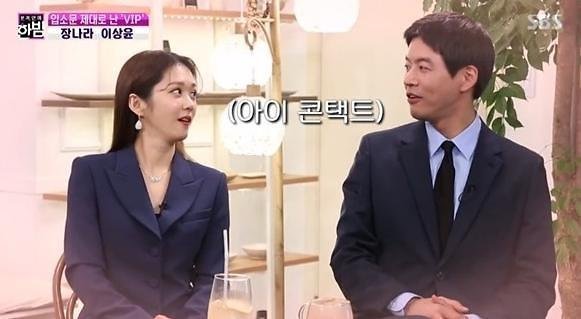 While Jang Nara and Lee Sang-yoon play a married couple on the currently airing drama "VIP", the drama is not conceptually a romantic one. Be that as it may, a broadcast of an interview between the two on the SBS entertainment news show 'E-news Exclusive' has inspired rumors that the two may be romantically involved.

The rumors appear to have been deliberately stoked by the interviewing questions. When asked about his prospects for dating Jang Nara, Lee Sang-yoon deliberately gave the coy answer of how nothing is impossible in the world. The eye contact and generally good interplay between the two in the interview also gave off romantic impressions.

While not much to go off, there is still considerably more substance here than there was for Jang Nara in the past. A few months ago she was embroiled in a rumor that she was about to marry Kim Nam-gil. Subsequent agency contacts confirmed that, in fact, the two had never even met each other. Their only commonality appeared to be that they were unmarried stars of about the same age.

Lee Sang-yoon also meets that definition. He is five months younger than Jang Nara, and while not quite as impressive a star, he at least had a good enough reputation to be cast as her opposite in the lead role of "VIP". The drama is currently airing on Monday and Tuesday nights on SBS.